Human dancers; man-machines; a mechanical orchestra; and a series of the cutest ever humanoid robots perform in Blanca Li’s show Robot at the Barbican

For sheer originality Robot is a show worth seeing. As the curtain goes up it reveals a figure standing immobile on a dark stage. Is it human? Machine? Both, it seems, as it becomes the canvas for a series of projections that reveal alternately the insides of a human body and the inner mechanisms of a machine.

This figure - human after all - is soon joined by his fellow dancers of the Blanca Li Dance Company. At first, to the beat of the human heart blended with the gurgling of flowing liquid, the eight dancers execute a series of mechanical movements, like a line of well-drilled robots.

Gradually their movements soften and they pair off. They touch and acknowledge each other. They dance together. We are definitely in human territory.

Now for long, though. Another curtain rises to reveal a group of machines of the most extraordinary shapes. There is, for example, a mini drums kit with a sharp green cartoon face painted on; something that looks like a flat lampshade; two windmill-like structures.

Ladies and gentlemen, meet the Maywa Denki’s mechanical orchestra, developed by a group of Japanese artists, the self-playing nonsense of which is triggered by the dancers’ movements.

And then the centrepiece: on comes Nao, the humanoid robot: 58-cm tall, fully programmable and highly interactive, he can talk, see, walk and, of course, dance. He is also impossibly cute; and a duet for him and one of the male dancers is truly irresistible.

Paris-based choreographer Blanca Li looked at modern man’s increasing dependence on machines and robots and asked many questions, such as “what are the borders between ‘us’ and ‘them?’” “Can a machine replace relationships to the living?:” “Will our robotic alter egos express feelings?”

Li’s show Robot aims to explore these questions in her trademark inquisitive and zany approach. She’s beautifully served by her company of eight highly-technical, intelligent and humourous contemporary dancers, as well all the weird and wonderful machinery interacting with them.

The show ends in a chaotic free-for-all: dancers running around and robots doing their own thing, as if to say total regimentation is impossible where humans are involved.

The image of the evening, for this viewer at least, has to be that of a Nao robot in his little silver-blue sequinned suit with a shocking pink feather boa wrapped around his neck singing a Spanish torch song in a night-club. That alone is enough to make one love robots…. and indeed Blanca LI’s Robot.
. 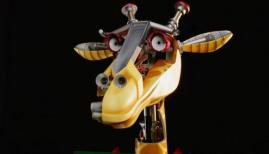 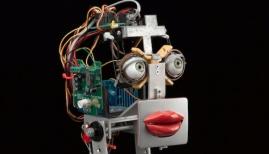 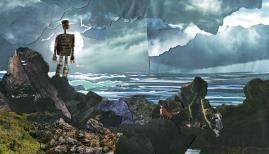