The superlative young dancers of Rambert2 are ill served by Home and Killer Pig, a double bill of showy but ultimately sterile works

Review: Rambert2, Home/Killer Pig 3 Review: Rambert2, Home/Killer Pig Teresa Guerreiro
Rambert2 is the junior company of Rambert. Dance school leavers from all over the world audition to join for one year, during which they’ll tour intensively and also work towards an MA degree. This year’s cohort are the best 11 out of a hopeful 650 candidates, and naturally they are the crème de la crème.

In fact, the relatively positive star-rating of this review was earned by them and them alone.

Rambert2 has been touring the UK for the past few months with a double bill of works by Micaela Taylor and Sharon Eyal, which has now reached Sadler’s Wells.

Time was when you picked a piece of music, danced to it and called it a dance show. No longer. Now the spoken word features increasingly in sound scores, be it through poems, making indistinct noises or, in the case of Micaela Taylor’s Home, appearing to set the scene. As the curtain goes up on a stylist set representing a minimalist room (set designer Candice MacAllister) a deep male voice intones: ‘Home. What is it? A room? An illusion?’

Alas, we never find out. Taylor’s choreography, to a varied score credited to SHOCKEY, is energetic enough, the 11 dancers of Rambert2 dealing impeccably with its athletic rhythmic movements, feet firmly planted on the ground, knees bent, much but not all of the work happening in the torso and arms. Their coordination is thrilling. 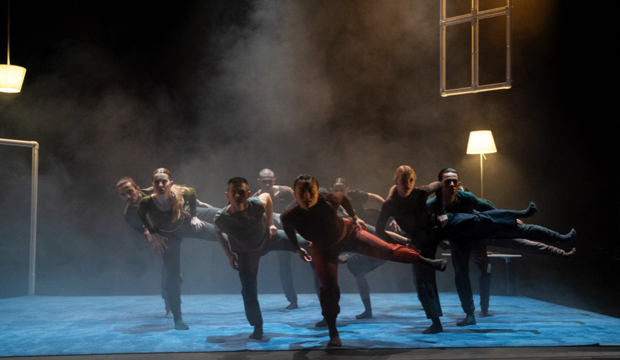 And the question arises: what is it all about? If you so definitely set your work to a theme, in this case ‘home’, should the choreography not bear some kind of relation to the theme? In Micaela Taylor’s Home, it doesn’t.

Sharon Eyal’s Killer Pig (pictured top) is a work for eight dancers, which relies essentially on posturing (in fact, it may well be what it’s all about). A very loud, thumping, repetitive score by her regular collaborator, Ori Lichtik, batters the audience into a kind of dazed submission.

The dancers are minimally clad in flimsy flesh-coloured leotards for the women and trunks for the men (how can such simple costumes be credited to no fewer than five people: Odelia Amol, in collaboration with Rebecca Hytting, Gon Biran, Sharon Eyal, Gai Behar?)

They start in a huddle, before fanning out on the stage in Eyal’s trademark, slow walk on demi-pointe, crotches foremost, cradled by hands that rest on upper thighs.

The whole thing feels like a prolonged provocation, an endurance test and possibly the longest 45 minutes of your life, though its style certainly poses a challenge to dancers, and Rambert2 responded admirably.