With this year’s edition of Dance Umbrella poised to hit London, Culture Whisper gets under the festival’s skin in a conversation with its supremo, Emma Gladstone 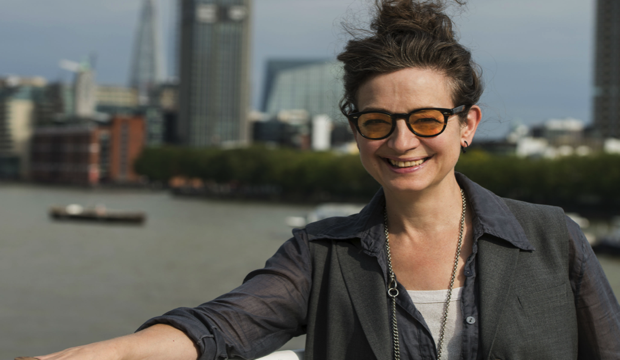 Emma Gladstone, photo Foteini Christofilopoulou
What IS dance? The question arises when we look at the bewildering variety of acts that make up this year’s Dance Umbrella Festival, DU17, which will pretty well take over London for the best part of October.

So, it seemed a good question with which to start a conversation with Emma Gladstone, Artistic Director and Chief Executive of Dance Umbrella.

‘I define it as a new work that’s led by movement, that’s my edge,’ Gladstone says. A lively, youthful woman with a contagious smile, she clearly relishes the opportunity to explore work that will push us all the way to her ‘edge.’

‘Certain pieces like Charlotte Spencer’s piece this year [Is This a Wasteland?], which is right on the edge for me, because there is sound and we the audience are asked to move and kind of follow the instructions; but actually it’s about space, it’s about time, it’s made by somebody who calls herself a choreographer, and and it’s such an extraordinary work.’ 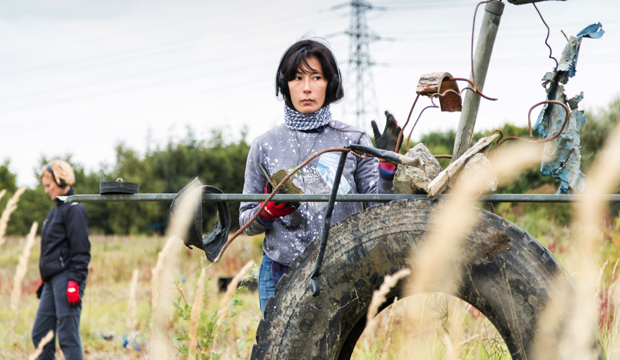 DU17 Charlotte Spencer, Is This a Wastelan? photo Pari Naderi
Performed in an industrial wasteland, Spencer’s work is indeed cutting edge, but DU17 is nothing if not diverse. At its most traditional is Lyon Opera Ballet’s Trois Grandes Fugues, performed in a ‘proper’ theatre stage at Sadler’s Wells.

At the other end of the scale we have ‘this mad programme, Out of the System, which we’re planning [to do] in the next 3 years. This is the first edition and it’s bringing in artists I don’t know, it’s a frame, it’s different from anything else in the festival, as the audience are walking about, there’s live music.’ 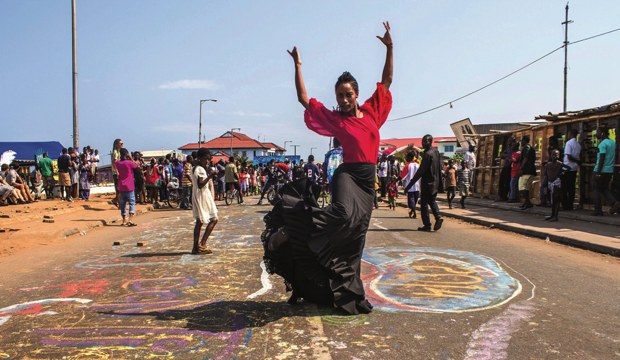 DU17 Out of the System, Yinka Esi Graves, photo Mantse Aryeequaye at Chale Wote Festival Ghana
Out of the System is curated by choreographer and performer Freddie Opoku-Addaie: ‘we provide the opportunity and he’s actually doing a festival within a festival, so we’re very excited about that.’

Some of the work is especially commissioned, and there is a strong international tone to the whole festival. Inevitably, then, an event as idiosyncratic as DU17 must reflect the personality of its curator. So, what does it tell us about Emma Gladstone?

She hesitates. ‘I think I’m quite…’ she breaks off and thinks some more. And then, with a glint of mischief in her eyes, ‘I was going to say promiscuous,' followed by an explosion of throaty laughter.

‘What I mean is, my choreographic interest is very broad. I love hip hop, I love straight contemporary (…) So, I'm not an artist, and one of the things I look for is very distinctive work, so that I can look at something for 10 seconds and go, that’s for us…’

Not only that: where the work is placed, its physical location is, says Gladstone, hugely important:

‘It’s all the diversity in lots of different ways, geographic … I like those different spaces and places; and one of the things I was most happy about last year was, there’s wasn’t a single piece in the programme that I thought was in the wrong place. That’s my responsibility of framing the work, my responsibility to connect the artist to the audience, and part of that is not what it costs, but where we put the work to make it shine.

‘It’s so open now! (…) I think the possibilities of where you can perform now have really shifted, massively shifted, including with Punchdrunk, and people that are exploring other ways to experience performance (…) I love this idea: the legacy it leaves is, I think, that whenever you go back to that place you remember it differently in your own system, it’s a different place in your heart, and I love that idea.’

Dance Umbrella celebrates its 40th anniversary next year, and in that time it’s truly spread its wings and reached greater and more diverse audiences every year. A graduate of Trinity Laban, Emma Gladstone has been in charge since 2013, the latest phase in a career which has taken her from dancing with the all-female iconoclasts, the Cholmondeleys, through a stint working with the first incarnation of Matthew Bourne’s Adventures in Motion Pictures, and periods as a programmer at The Place and Sadler’s Wells.

This year’s innovations include a range of partnerships with organisations not immediately connected with dance, among them the National Theatre: ‘I really wanted it to go to what I might call a theatre-theatre as opposed to a dance theatre.’ The NT will host a lecture by Professor Liz Lerman of the Herberger Institute for Design and the Arts on the different ways in which we watch theatre and dance.

In short, Emma Gladstone is having the time of her life - ‘it’s such a fun job! I think the pleasure is that it’s a creative occupation’ - and the enthusiasm and relish with which the approaches her work will be evident when DU17 hits town on 11 October.

DU17 runs from 11-18 October. Tickets and full details on: http://www.danceumbrella.co.uk