Phoenix Dance Theatre’s Black Waters, an unflinching examination of the crimes of colonialism, comes to the Peacock Theatre as part of a nationwide tour

Two years ago, before the Windrush deportation scandal had fully erupted, Phoenix Dance Company brought us its moving portrayal of the first Caribbean arrivals in the UK, in its ballet Windrush: Movement of the People.

For its new work, Black Waters, Phoenix Dance Theatre delves into two events separate in time and place that are, nevertheless, connected by being part of Britain’s imperial history.

In the late 18th century, 130 slaves being transported on the Zong ship were thrown overboard, and the ship’s owners tried to claim insurance on the loss. Over 100 years later, the British incarcerated Indian freedom fighters in the notorious Kala Pani prison. 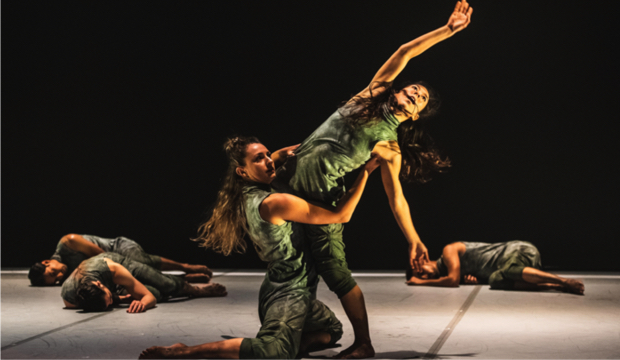 Phoenix Dance Theatre, Black Waters. Photo: Stephen Wright
As Sharon Watson stresses, Black Waters is not a dance re-creation of these two episodes; rather, it uses them as a starting point to explore how British colonialism reduced human beings to commodities, and the resulting – and ongoing – disputes over who has a right to call any place ‘home’.

Black Waters is choreographed by Sharon Watson in collaboration with the artistic directors of the Kolkata-based Rhythmosaic, Shambik Ghose and Dr Mitul Sengupta. This collaboration is a first for Ms Watson. The attempt to fuse two distinct dance languages, that of contemporary dance and classical Indian kathak is also a first for Phoenix Dance Theatre.

The score comes from the award-winning Indian composer Dishari Chakraborty.

Although both episodes that inspired Black Waters are harrowing, the work does not end on a downward note; rather, it is intended to show that from despair people can create hope.