The Royal Opera House joined Dance Reflections by Van Cleef & Arpels with Ola Maciejewska’s Bombyx Mori, which had its UK premiere at the Linbury Theatre

Loïe Fuller (1862-1928) was an American actress and dancer, the first of a growing number of performers who crossed the Atlantic hoping to receive more recognition in Europe than they were getting in the US.

Fuller was right: she was welcomed in Paris, where she became one of the exponents of Art Nouveau. She became known by the way in which she brought increasingly voluminous lengths of fabric, such as silk, into her performances, so that often the body was barely visible and the movement was created by the flowing fabric. 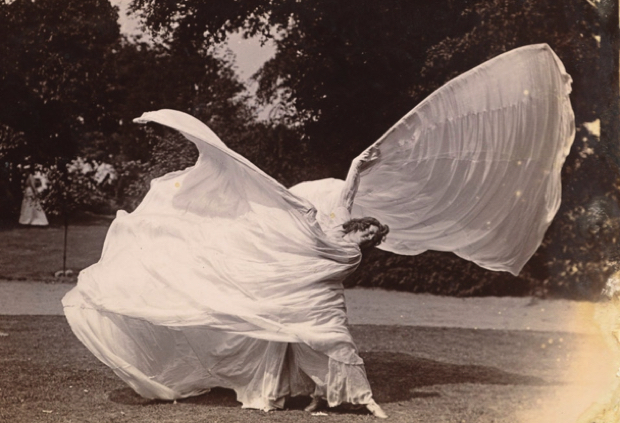 Loïe Fuller photographed by Samuel Joshua Beckett c 1900
She also developed pioneering and jealously guarded lighting techniques and stage effects, which, combined with the colours of her costumes, created an illusion of magic, as if a glowing fairy, or a delicate butterfly, had descended to the stage.

Maciejewska’s Bombyx Mori, named after the silkworm, is not intended as a reproduction of Fuller’s work, much less an homage; still, it draws its inspiration from her pioneering ways, although one wonders what Fuller herself would have made of her latter-day interpreter.

For one thing, most of Bombyx Mori is performed in the densest penumbra, its three performers, two women and one man, shrouded in black. No colour, no light effects, no music either, only vague electronic noises, which are apparently made by recording and remixing the rustling of silk, though if you didn’t know it, you’d be hard pressed to guess.

The three performers walk on painfully slowly, each carrying a bundle of black silk, which they lay down on the stage, and spend what feels like an eternity unfolding and shaping their bundles into circles. After a time lying immobile on the ground, they slowly get into the silk. The lights go down dramatically.

They line up and walk ponderously towards us, like harbingers of doom. And then a bang, crash from the soundscape signals the beginning of the silk dance.

Using the same process as Loïe Fuller, two hidden bamboo rods that help direct the flow of the fabric, they create large, beating wings, at times less reminiscent of butterflies and more of Maleficent in Disney’s 1959 animation of Sleeping Beauty.

Individually or together they create shapes and although some are intriguing, and the finale, where the swirling fabric resembles giant shells, is quite mesmerising, as a whole this is a punishingly dark, somnolence-inducing show that doesn’t quite sustain its one-hour duration.

A second work by Ola Maciejewska, Loïe Fuller: Research is performed on Sunday, 13 March at 2pm and 5pm. Returns only