The final two programmes of New York City Ballet's superlative 2020 Digital Spring Season have been announced, taking us to the end of May

New York City Ballet (NYCB) is the foremost exponent of its legendary co-founder, the choreographer George Balanchine’s work. Trained in the Russian ballet tradition, upon coming to the USA Balanchine became intent on creating a uniquely American ballet style. He succeeded, and today NYCB is one of the world’s foremost ballet companies, blending classical ballet technique with characteristically American attack.

Its repertoire includes many Balanchine works, as well as pieces by his friend and collaborator Jerome Robbins, and new work commissioned every season as the company evolves and seeks new challenges.

NYCB's 2020 Digital Spring Season has been bringing us a taste of established work on Tuesdays, and new commissions on Fridays.
Here are the latest programmes:

Tuesday, 19 May NYCB returns to George Balanchine's glittering Jewels. After Rubies, shown a couple of weeks prior, this time we have the final of the ballet's three sections, dedicated to the grandeur of Diamonds in a Russian imperial setting with music by Tchaikovsky. The lead couple are the superlative Sara Mearns and Russell Janzen.

Friday, 22 May is dedicated to the British choreographer Christopher Wheeldon. Liturgy is a pas de deux performed by Maria Kowroski and Jared Angle, set to a score by Arvo Pärt. 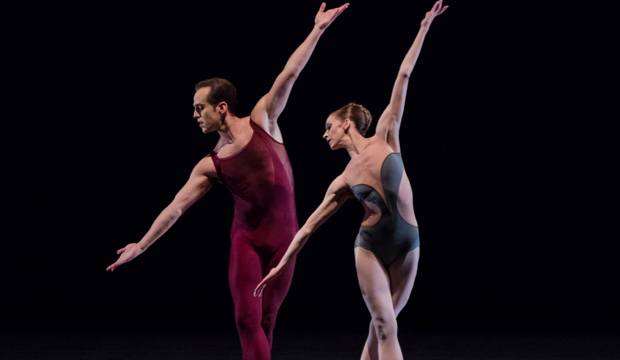 Maria Kowroski and Jared Angle in Christopher Wheeldon's Liturgy. Photo: Paul Kolnik
The second Wheeldon piece of the programme is Carousel (A Dance). Set to an arrangement of Richard Rodgers’ 'The Carousel Waltz' and 'If I Loved You' from the 1945 musical Carousel, it's performed here by Lauren Lovette and Tyler Angle.

Every good thing must come to an end, and so we reach the final week of NYCB's unmatched 2020 Digital Spring Season

Tuesday, 26 May brings us Balanchine's Donizetti Variations. Here's a taster:

Balanchine created this light, joyful work for a NYCB programme celebrating the centenary of Italy's unification. The performance to be shown as part of this Digital Season was recorded in New York in January 2015, and stars Ashley Boulder and Andrew Veyette.

On Friday, 30 May the Digital Season ends with a festival of 21st century choreographers, made up of excerpts of some of NYCB contemporary repertoire, including:

– Justin Peck, Easy, filmed on May 3, 2018 (world premiere performance).
The season has given us a number of opportunities to assess Peck's work as NYCB resident choreographer. Easy will add to our view of his work.

– Pam Tanowitz, Bartók Ballet (excerpt), filmed on May 2, 2019 (world premiere performance).
Tanowitz was a huge revelation for London audiences when she brought her Four Quartets to the Barbican the season before last; and one of the great disappointments of the curtailment of the 2019/20 season was the loss of her New Work for Goldberg Variations, which had been billed for the same venue. We can't wait to see this work she created for NYCB.

– Alexei Ratmansky, Voices (excerpt), filmed on January 30, 2020 (world premiere performance).
Ratmansky is one of the most exciting choreographers working today. NYCB's 2020 Digital Season has already shown us one of his pieces; now we can see an excerpt from a different, but equally enticing work.

Gianna Reisen, Composer’s Holiday (excerpt), filmed on September 28, 2017 (world premiere performance).
This is an interesting one: Gianna Reisen was in her late teens when she contributed a ballet to NYCB's repertoire. She was and remains the youngest choreographer ever to do so.

Kyle Abraham, The Runaway (excerpt), filmed on January 31, 2019.
Featuring Taylor Stanley.
The choreographer Kyle Abraham has been garnering plaudits, superlatives and a raft of awards for his dance making, described as equal parts power and grace. The Runaway, created for the New York City Ballet’s 2018 Fall Fashion Gala was recognised as one of the 'Best Dance of 2018' by The New York Times.

Justin Peck, The Times Are Racing (excerpt), filmed on January 26, 2017 (world premiere performance).
Featuring Robert Fairchild and Justin Peck.
Justin Peck dances in his own creation with Robert Fairchild, whom you may have seen on the London stage when he starred in the musical An American in Paris at the Drury Lane Theatre.

Mauro Bigonzetti, Oltremare (excerpt), filmed on April 23, 2019.
Bigonzetti is Italy's best known contemporary choreographer, and has created work for a wide range of international dance companies. Oltremare was commissioned by NYCB, and you can watch a short trailer here