Camilla Greenwell describes her dance photographs as 'a snapshot of what's happening'. As she told Culture Whisper, hers are not the photos that capture the perfect feat of classical technique, the perfect jump; rather, she is interested in detail, 'a face', 'something you might miss in a live performance.'

You'll be able to enjoy those special moments in an exhibition of her work, Movement in Still Form, assembled for Sadler's Wells Digital Stage, which will become available to view on International Dance Day, Thursday 29 April.

Produced by Robyn Cabaret, it was originally going to be a physical exhibition, but Covid restrictions put paid to that for the time being. So Movement in Still Form will be now be a guided virtual exhibition, an option which, Greenwell feels, has its advantages:

'The one thing about online is that I think it'll reach more people, which I think is great. One thing, [lockdown] has done is that whereas before people would say, "oh no, this is isn't accessible", well, it is now. The way that Rosanna [Chianta] from Sadler's Wells has built the website is so that it also includes audio, just to make it feel a bit more like an experience. She's beautifully curated it, the text goes along with images, there is a bit of movement within it, which I really like.'

All the photos were taken during the creative process in the studio. 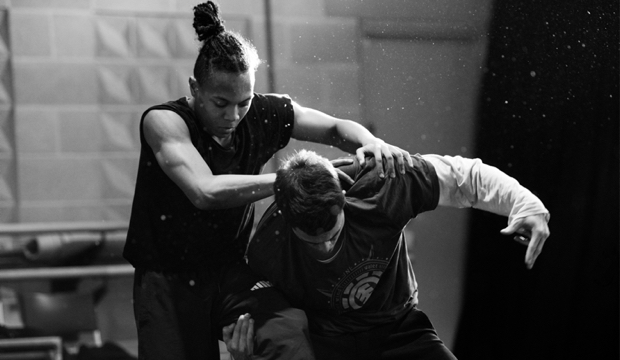 Jordan Douglas and Ezra Owen in Far From the Norm, BLKDOG. Photo: Camilla Greenwell at Sadler's Wells
Over the past decade Greenwell has worked extensively with dancers and performers, both in Britain and internationally, and her portfolio includes work by Rambert (most recently she photographed Rambert's Rooms), Wayne McGregor, National Theatre, Gandini Juggling and BLKDOG, (pictured here) to mention but a few.

Some of the dancers she's worked with can be heard in the audio component of the exhibition.

'One of my favourite bits is, I spoke to three of the artists who are shown in the exhibition, and we called out bits of what they said, not necessarily about working with me; a lot of it is about being in the studio, what it means to them, so there are audio bits where you can hear their voices.'

The quality and self-assurance of Camilla Greenwell's work belie her youth; but photography became the natural destination of a learning process that started at Central St Martin's School of Art, where she learned to make photos of her sculptures that disguised the fact they were, in her own words, 'not good', then took her briefly to the theatre, where she was given an opportunity to photograph a large-scale production and discovered she much preferred taking pictures to acting.

'I think definitely my journey to this has helped. I think there are wonderful photographers who are dancers, or were dancers, and they have a way of photographing. I will never be that; but I think all of that journey has helped what I do now.'

Movement in Still Form may yet become a physical exhibition, once Covid restrictions are out of the way; but for now, we have the opportunity to see it in its especially curated virtual format – a worthy addition to International Dance Day celebrations.