‘All grown-ups were once children… but only a few of them remember it,’ said Antoine de Saint-Exupéry, the writer of The Little Prince. Luca Silvestrini’s dance-theatre adaptation of this classic, though, makes it easy for grown-ups to return to the simple enchantments of childhood and enjoy this charming, vibrant show as much as their own youngsters.

Saint-Exupéry's book tells the story of The Little Prince, who leaves his home in asteroid B6-12 to journey through a weird universe, meeting new characters and learning about the value of friendship and love.

The set is made up a versatile collection of oversize globes (designs by Yann Seabra and lighting by Jackie Shemesh), around which four brightly clad performers from Luca Silvestrini’s Protein company enact the story. Two actresses alternate as The Little Prince; on press night, the minute, gamine Faith Prendergast was an entirely credible, hugely relatable protagonist. 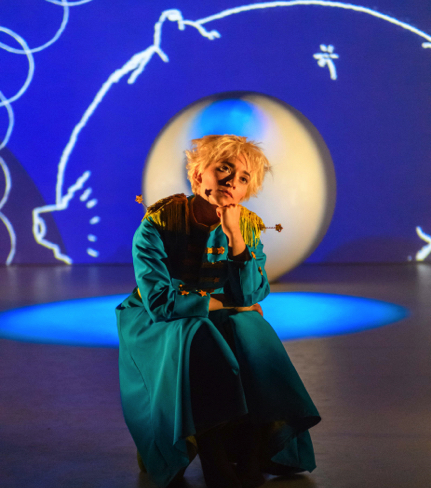 They make friends and The Little Prince tells the Pilot of his journey. The story is told through words, song and dance to a specially commissioned score by Frank Moon. Some of the action, including the Pilot’s hesitant attempts at drawing, are illustrated by outline video (Daniel Denton) projected onto the backcloth.

There are many memorable scenes in this vivacious show; for this reviewer, the sequence where the wild Fox and The Little Prince slowly come to trust each other and become friends was one such. Starting on their knees from opposite sides of the stage, Fox and Little Prince slowly edge closer, the alarmed Fox jumping back when the over-enthusiastic boy comes too close too fast, and then resuming their cautious progress.

That it works on so many levels is not surprising: Luca Silvestrini is always keen to involve the audience in his creations, and The Little Prince is the result of extensive workshopping relying primarily on the contributions of young viewers.

There is a lot of humour and some gentle interaction with the audience. Luca Silvestrini’s The Little Prince fills the eye and the heart; and is an ideal family alternative to traditional Christmas shows.

We cannot recommend it highly enough.