The Boyz are back: Javier de Frutos and Pontus Lidberg create for the fabulous BalletBoyz at Sadler’s Wells

Back after the WW1-inspired Young Men to their usual all-male format and presenting an evening of new work from eye-catching choreographers, the arrival of the BalletBoyz in London is an event worthy of your attention.
Choreographers Javier de Frutos and Pontus Lidberg take ‘an elegant, powerful and provocative look at life and death.’ While they could hardly be more different, each seems to agree that life is by nature surreal, lonely, and peppered with unexpected joy.
BalletBoyz: Life
30 seconds into Pontus Lidberg’s Rabbit, it’s clear the BalletBoyz dancers are on top form. Against a peachily lit stage, a man with a rabbit’s head sits on a swing. Downstage, dancer Bradley Waller skims the stage in circling shapes that roll silently between air and floor. Leap and landing are equally noiseless, setting the standard of graceful strength that defines this piece.
Then a whole company of rabbits roll onto the stage. First the man is an outsider in a rabbit crowd, then one of a team. The crowd is both threat and family, the rabbit heads a mark of belonging and a mask to hide behind. Making good use of the opportunity for unusual lifts in an all-male company, Lidberg laces classical, almost erotic duets with boyish, brotherly holds.
Many of Lidberg’s awards have been won in dance film, and Rabbit is laden with memorable images - long ears thrashing as the dancers stamp in unison; two bunny-headed men roly-polying across the stage behind a lithe duet; a host of rabbit heads backlit and silhouetted against white silk screens. 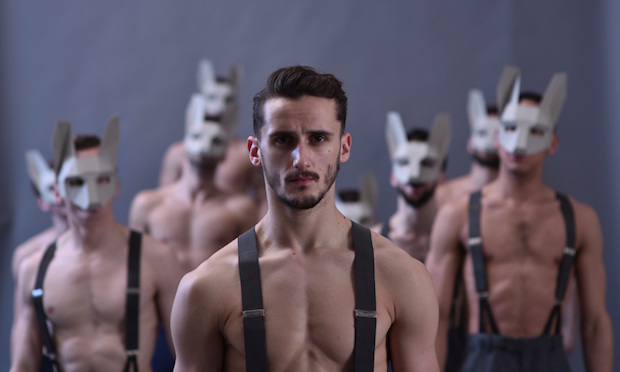 There is no time for image in Javier de Frutos’s Fiction, a piece that hurls itself obsessively into its concept - a dance company in tracksuits around the barre on a bare stage, coming to terms with the death of their choreographer.
The soundtrack to Fiction is in part Ben Foskett’s jubilant score. The rest is de Frutos’ own obituary (a sudden end by shards of falling plastic), commissioned from dance critic Ismene Brown and read aloud by Derek Jacobi, Jim Carter and Imelda Staunton.
It’s hard not to revel in the wackiness of three national treasures narrating a fake death for a company of 10 athletic male dancers - a characteristic move from the choreographer whose career takes in naked solos and musicals for the National Theatre.

The Boyz dance the narrative abstractly in twos and threes, gesturing the highs and lows of de Frutos’s notable career until Foskett’s music crashes through, and the whole company fling themselves over, under and around the barre.
One dancer is separated (a dynamic Marc Galvez) and becomes an outsider, first proud then lost. The group chase, then lead, they bully then protect. Swinging and slumping in intricate gymnastics, it’s a cabaret of grief and the mess death leaves behind.
If some sections are a little long, it’s a small price for the relentless energy and wit with which this piece is delivered.
Finally we find Galvez alone, and soul musicswells in the air. Letting go at last of the barre, he dances as you and I would do when no-one is watching, pure joy on his face until the curtain comes down.

If you didn’t get tickets for the BalletBoyz in London in April, they’re back in May at the artsdepot.

WITHIN (Labyrinth Within) by Pontus Lidberg, an excerpt