TRY CULTURE WHISPER
Receive free tickets & insider tips to unlock the best of London — direct to your inbox
Since it was composed in the 18th century, Goldberg Variations has been transcribed for other instruments, most notably the piano. Now the Barbican presents yet another take on this great work, as it’s played by eleven string players of the Scottish Ensemble and simultaneously danced by five contemporary dancers of the Stockholm-based Andersson Dance.

Choreographed by Örjan Andersson, this reading of Goldberg Variations, (full name ternary patterns for insomnia) captures the various moods of the music – slow and fast, light and meditative, extroverted and introverted – and resists the separation between musicians and dancers by asking the musicians occasionally to lay down their instruments and join in the dancing.

The aim is to achieve a complete marriage of sound and movement, thereby unlocking yet another dimension of Goldberg Variations, a work whose seemingly endless layers have been unpeeled by so many interpreters over the years, and continue to be so.

The Scottish Ensemble/Andersson Dance's take on Bach’s Goldberg Variations is an original, intriguing and enticing proposition. 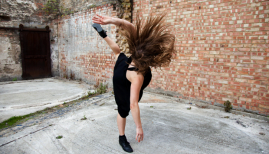