From Life, McNicol Ballet Collective, Bloomsbury Theatre From Life, McNicol Ballet Collective, Bloomsbury Theatre Teresa Guerreiro
Andrew McNicol may not be a household name in choreography yet, but with endorsements from the likes of Sir Peter Wright – ‘really someone to watch’ – and the veteran ballet writer Jann Parry – ‘impressive young choreographer, musical and fully engaged’ – he is sure to hit the big time very soon.

At only 27 years old, McNicol is already a prolific dance-maker with creations for, among others, Birmingham Royal Ballet, The Royal Ballet of Flanders, and the New York Choreographic Institute.

Now McNicol is opening a new chapter in his career with the launch of the McNicol Ballet Collective.

His idea, McNicol explains, is to create a new type of company, that offers world-class dancers a flexible platform, with performances they can fit around the busy schedules of their own home companies.

For Life launches with the participation of Laura Morera and William Bracewell, principal and first soloist respectively of The Royal Ballet, Nancy Osbaldeston and Gabor Kapin, principals of the Royal Ballet of Flanders, and Giulia Frosi and Gareth Haw of Semperoper Ballett Dresden.

For Life is also very much a showcase for McNicol’s choreography: all four pieces in the programme are his own. In addition, the programme will include his award-winning short film, Of Silence.

Of Silence Trailer from Andrew McNicol on Vimeo.

The live works are all world premieres. The tile piece is set to music by Bach; In Ecstacy features a newly commissioned score performed live by composers Nicholas Thayer and Setareh Nasfi; Of Silence is set to music from Peteris Vasks, with designs by Emma Bailey, and Bates Beats is performed to music by Mason Bates.

It’s a daring project from McNicol: with all the works in the inaugural programme his own, he has nowhere to hide. That, of course, only adds to the excitement… 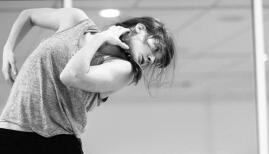