Pop-up 1940s cool: tap your toes, singalong and conga to the bar in this vibrant, feelgood revival of Clarke Peters' jazz-soaked musical

A vast spiegeltent, right by Marble Arch tube station, transports you to a New Orleans Jazz bar. Cocktails flow, the brass section booms and we could happily spend the whole evening ensconced in the buzzy foyer. Happily, the circular performance space is a continuation of the festive atmosphere.

Five Guys Named Moe tells the story of Nomax: down on his luck, bereft of girlfriend and overly fond of whiskey, he has ‘Nothing But The Blues’.

Until five men climb out of his radio. 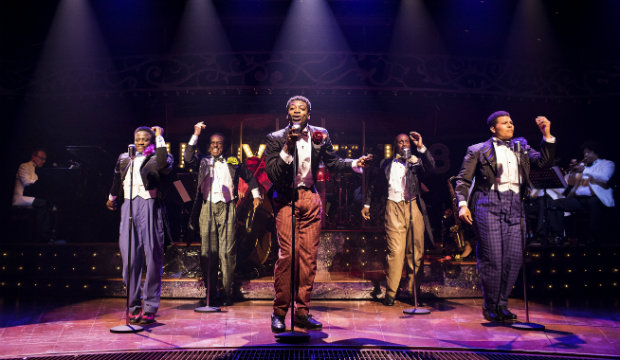 Rather than dialogue or plot, the story is propelled by a cracking selection of hit songs from King of Jukebox and Grandfather of Rock & Roll, American songwriter and bandleader Louis Jourdan. Jazz, blues, calypso, gospel, early R&B and country come together, all to the tight beat of a swing bang.

Standout numbers include an uproarious ode to larger ladies (I Like 'Em Fat Like That), a bouncy country and western tale of staying single (Safe, Sane and Single), and a lively version of Aint Nobody Here But Us Chickens.

All five of the guys match wow-factor vocals with slick dance moves. Andrew Wright’s choreography reflects the vitality and variety of the song book, spanning tap-dancing and jazz hands to balletic leaps and booty shaking.

Cabaret style tables in the tent’s inner circle and a stage that cuts through the seating areas bring the audience up close to the action. There is nothing passive about this show. We see the sweat and feel the whoosh of actors prancing past; we’re invited into the performance, encouraged to sing-a-long and coaxed into a conga-line to bar at the interval.

The feel-good vibes and energy are infectious, if initially a little unnatural in an auditorium of stiff-lipped Brits. While this particular theatre reviewer panicked at the prospect of audience participation, the guys are good at picking on extroverts. And, after a few songs and maybe a glass of wine or two, even the shyest of audience members will be ready to Let The Good Times Roll.