The flaws in Eagling’s Nutcracker are well documented – those hideous mice who far outstay their welcome, the confusion in identity between the Nephew and the Nutcracker and the general busyness of Act One itself. With this in mind, it’s easy to pick faults and compare this to the Opera House’s opulent production; but the ENB dancers bring their own unique brand of warmth and character to this production, dancing throughout with such joy and charisma that it’s easy to forgive the cloudy storytelling.

There is a lot to decipher in the Act One party scene, much of which is danced by children from the Tring Park School of Performing Arts. Sophie Carter is perhaps one of the smallest child Claras I have ever seen, nearly eclipsed by the enormous Nutcracker doll she is given to dance with; however, she copes admirably, performing her solo with endearing neatness and confidence.

As the party subsides and night falls, child Clara transforms into adult Clara – a radiant Rina Kanehara, who danced with a wonderful sense of freedom and excitement. Unfortunately she was not assisted as ably as one would like by Fernando Carratala Coloma’s Nutcracker, whose partnering did not look comfortable initially. This said, Kanehara shares a sweet chemistry with both Coloma and later Jeffrey Cirio’s Nephew. 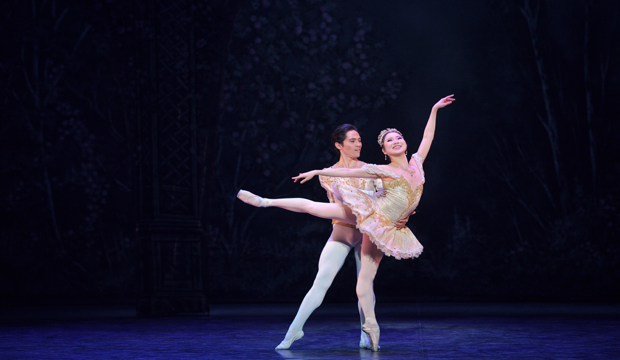 In the dreamy Land of Snow where glitter falls from the sky, there are faultlessly rehearsed snowflakes, led with complete control by Alison McWhinney and Tiffany Hedman.

Act Two is where Eagling’s production truly hits its stride. The unnecessary fuss is cut and the dancing is allowed to dazzle. There is a strong Waltz of the Flowers delivered by Tiffany Hedman with Precious Adams. They hold the corps de ballet together with style and and serenity, never wavering as the majestic score builds to the climactic end of Clara’s dream.

The character dances are mostly performed with panache with the exception of the rather dreary Arabian not helped by the bland choreography. Daniel McCormick excels in the Spanish dance, full of flair and style. Katja Khaniukova shows great energy and agility in the Chinese dance negotiating props and lifts with ease.

And the glorious Sugar Plum Fairy pas de deux finally gives Kanehara and Cirio an opportunity to showcase their partnership without the interruption of the changing identities. Cirio is a thoughtful partner, taking great care to display his ballerina to her fullest potential, and Kanehara shows maturity in a slow burning performance that increases in grandeur as the music builds.

For its flaws, ENB's Nutcracker is still a hugely satisfying experience, and is enhanced by Tchaikovsky’s score faultlessly played by the English National Ballet Philharmonic, conducted by Gavin Sutherland.

Note: ENB’s is one of three Nutcrackers coming to London this Christmas. The others are presented by The Royal Ballet and Birmingham Royal Ballet.