A miasma of angst pervades the gathering of 15 young people, with violence never too far beneath the surface. We’re at a rave, seen by the Franco-Austrian choreographer and director of Crowd as a microcosm of social interaction.

Very slowly they converge onto a stage set as a field covered in vegetable matter and dotted with undetermined detritus. They come in ones, or in small groups, their trance-like progress underlined by drawn-out electronic notes.

They wear the ‘uniforms’ of urban youth: scruffy denims, hoodies, bright nylon tracksuits, scuffed trainers, one girl making a statement with her glittery footwear. And although some appear superficially to relate to each other, most seem entirely self-absorbed.

At the first burst of a techno trance soundtrack (selected by Peter Rehberg), they move centre stage and start dancing. Theirs is not, however, the free-flowing individual dance of youngsters simply having fun, but rather highly choreographed syncopated movements loaded with consequence and menace.

As they lose themselves in movement, spurred on by the music’s relentless beat, so a complex web of emotions comes to the fore, and the rave becomes a collective ritual, unleashing moments of love, violence, intimacy and aversion.

A man forces his attentions on an unwilling woman. Two men fight, squaring up to each other like young bucks. Two women kiss. The soundtrack is boosted to aural overload.

There are also moments of absolute nothingness, when everything stops. They form tableaux which, lit diagonally from above (lighting design by Patrick Riou), create an interplay of light and shade reminiscent of Baroque paintings, only seen through a slightly distorting modern lens.

Gisèle Vienne’s dancers are remarkably expressive, inhabiting a combination of emptiness, diffuse yearning – arms and eyes raised to heaven are a recurring motif – self-absorption and a moving resignation, sometimes through the slightest of movements or by simply standing there. It’s really awesome how much a good performer can convey just by standing motionless.

Crowd ends on a becalmed note, all passions of the stormy rave temporarily tamed. Upstage, two men engage in a tender and prolonged embrace; downstage, the jackets of three dancers start exuding smoke that slowly spreads and thins out above their heads. You have the sense that the sun has risen and another day begun.

Crowd is one of those rare works where the whole is a lot more than the mere sum of its parts. It stubbornly follows you even as you walk out of the theatre, and for quite a while afterwards. It sets a high bar for forthcoming DU19 shows. 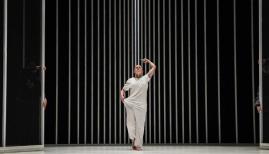