As the world premiere of The Nutcracker and I, by Alexandra Dariescu looms tantalisingly close, we talk to some of the artists bringing us a Nutcracker like no other 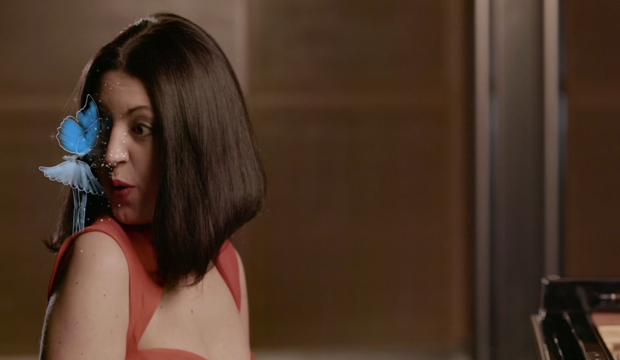 The Nutcracker and I, by Alexandra Dariescu, photo Yeast Culture
Alexandra Dariescu’s dreams have a knack of coming true. As a little girl in Romania, she dreamt of becoming a concert pianist. Spool forward a few years, and she’s recently been named as ‘one of the 30 pianists under 30 destined for a spectacular career.’

Then three years ago, she had another dream. She wanted to create a Nutcracker like no other. She was inspired by Hoffman's tale of a little girl’s fantastic Christmas night adventure, which has become a staple of festive ballet the world over; and by Tchaikovsky’s much loved score.


The Nutcracker and I, by Alexandra Dariescu is about to become reality. At 50 minutes’ length it’s not a competitor to established full length ballets with numerous casts; rather, it’s a small-scale production, involving a pianist, a ballerina and a cast of digitally animated characters - all of which makes it ideal for the whole family, small children very much included.

I met Dariescu and two of her collaborators – choreographer Jenna Lee and ballerina Désirée Ballantyne – to learn more. And judging by the enthusiasm of all three artists, this sounds like a truly exciting project.

So, how does it work?

Alexandra Dariescu: ‘In a way it’s a story within the story. I was once asked, what do you imagine when you play? Because, of course, we go to a piano recital, we see piano and pianist and that’s it, [but] I actually imagine stories, so this is the perfect way to show the audience what I’m imagining as I play.’

On stage there will be a piano, actually representing the Nutcracker's magician, Dr. Drosselmeyer, because, Alexandra explains, ‘it’s the piano that’s the magic medium that makes it all link together.’

There’s a see-through gauze screen, upon which are projected digital animations representing the various characters of the tale as they dance along to the music. These are created by Yeast Culture, the animators Dariescu hand-picked, for whom this is a first too.

‘The first time we met was about two years ago, and [Yeast Culture Director Nick Hillel] said, 'Alex, this has never been done before’ because normally they would have playback music, and I said, no no, this is a piano recital, it’s going to have some extraordinary virtuosic arrangements and I want it to be with live music.’

And choreographing for a real live dancer and a company of digital characters was a first for Jenna Lee, too.

‘In a way it limits you in certain aspects, but then it gives so many possibilities; you don’t need to worry about the [dancers] entrances, because we can fly them in, or they can disappear in a puff of smoke (…)

‘It’s quite an open way of choreographing. Usually I go from beginning to end and rehearse the dancers exactly with what they’re doing and then they know what they’re doing. With this it’s been a different beast really; it’s kind of evolving, which is exciting and daunting.’

Exciting and daunting is also how ballerina Désirée Ballantyne, who alternates in the role of Clara with Amy Drew, describes the challenge of dancing with a cast of digital characters. 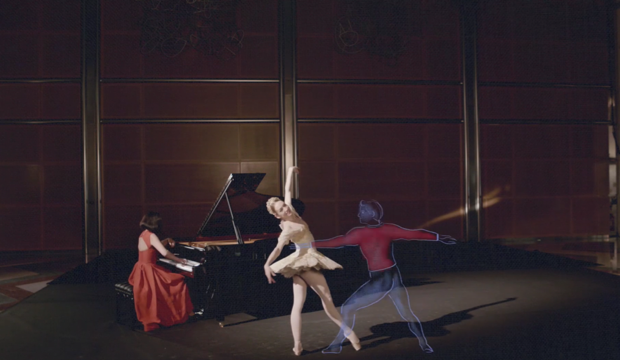 The Nutcracker and I, by Alexandra Dariescu, photo Yeast Culture

’It employs a larger skill set than just, now get up and dance, so linking in with the projections and bringing that alive, making it believable (…) acting to kind of create a link between what’s real, what’s imagination, what’s projection, that’s very exciting; but at the same time it’s also very restrictive because of the precision [required].’

It gets even more perplexing, because the ballerina will have to perform the final Grand Pas de Deux with a digital partner! Jenna and Désirée laugh out loud when I press them about what seems to me an impossible task.

Jenna: ‘Interestingly we made it with a partner, but every time we had to check, Desirée could you do this by yourself? are you really leaning on him? (more laughter) So we did check things like that.

‘I think for the Grand Pas de Deux number particularly, it’s such an epic piece, it was, “how do we make this grow, how do we make it exciting where we can’t do a fish dive,’ so that was challenging to make it feel as grand as the music.’

It’s all coming together in the final few weeks before the world premiere on 19 December; and then The Nutcracker and I, by Alexandra Dariescu starts what all hope will be a busy international career.

Alexandra: ‘We’re really really hoping we will be touring. The first thing we’ve got is Moscow, Désirée and I are going, we’ve got 19 performances in 7 days, so it’s exciting!’

The Nutcracker and I, by Alexandra Dariescu receives its world premiere on Tuesday 19 December at Milton Court, 6pm & 8pm,
barbican.org.uk

The Nutcracker and I