The latest work from Cloud Gate Dance Theatre, Formosa, is a love letter to its homeland of Taiwan and a parting gift from its veteran director, Lin Hwai-min

Formosa is Taiwan’s former name, coined when 16th century Portuguese sailors first caught sight of the island, off the coast of Southern China, and dazzled by its lushness exclaimed: ‘Formosa!’, the Portuguese word for ‘beautiful.’

Now Formosa is the name of the latest work brought to London by Cloud Gate Dance Theatre – a love letter to the island, combining poetry that extols its beauty, projections of Chinese characters on a simple white backcloth, and of course, dancing.

The company of 22 dancers is superb. At once graceful and energetic, the dancers’ technique combines a basic contemporary language – think Martha Graham or Merce Cunningham – with strong influences from traditional Chinese dance forms and martial arts.

In addition, Cloud Dance uses meditation and the Chinese breathing technique of Qi Gong as key tools; and you are aware throughout of the dancers’ often audible breathing.

Formosa is divided into nine sections, each an impressionistic depiction of physical features of the island – rivers, rice paddies, the whirling ocean – its animals, most often deer, and moments from its troubled history.

As the dancers, clad in simple baggy costumes in beautifully subdued earthy colours – dusty pinks, greens, dun tones – perform, so a disembodied male voice reads out extracts from poems, while Chinese characters, which presumably depict some of the verse, are projected onto the white backcloth. Some sections are accompanied by plangent or tumultuous Chinese music, others just by the voice.

Most of the sections feature the ensemble often in fast, vigorous sequences, where occasionally one or two dancers fall away from the well drilled group and create patterns of their own. There are, too, a couple of pas de deux of a slower, calmer, more meditative nature, such as Section Two, where a man dreams of standing in a rice paddy and meeting a gorgeous egret, danced here with an aloof elegance by Huang Mei-ya.

The voice over narrates further: ‘Now we sit between the paddies/Someone upwind is burning rice straw/Pale smoke wafts between us…’

For a foreign audience though, a work so wedded to words presents a problem: if you can follow the Chinese poetry declaimed as a central element of the performance and decipher the Chinese characters on the backcloth, while watching the dancing, then you have before you an organic and harmonic whole.

If, however, you have no knowledge of the Chinese language and have to keep resorting to the surtitles high above the stage, then, of course, your enjoyment of the work is significantly diminished, as your eyes move from stage to surtitles and back again, inevitably breaking the flow of the dance.

For Formosa, his final piece for the company from which he will be retiring at the end of 2019 after 46 years in charge, Lin Hwai-min has returned to his roots as a writer and created a work that seems to encapsulate his own life cycle inextricably linked to the homeland he clearly loves. It is just very frustrating not to be able to abandon oneself to it completely. 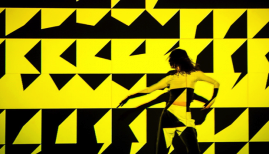