Candoco returned to the stage at Sadler’s Wells with a never less than interesting, if challenging, double bill of works by American choreographers

The company marked its 30th anniversary and return to the stage after the long lockdown with a double bill of works by American choreographers: Trisha Brown’s 1983 Set and Reset, now reworked Brown alumna Abigail Yager with the input of Candoco’s own dancers and renamed Set and Reset/Reset, and a new work by Jeanine Durning, entitled Last Shelter.

Set and Reset/Reset (pictured top) is a work of fluid geometries, a continuum of movement where dancers in floating, diaphanous costumes by Celeste Dandeker Arnold, based on the original design by Robert Rauschenberg, draw intricate patterns on the stage against the backdrop of a sepia-coloured panel where triangles intermingle (design by David Lock also based on Rauschenberg’s original).

At times the women look like fleeting wood nymphs, skipping to Laurie Anderson’s propulsive score, their feet barely touching the ground, their constantly rotating arms creating circles above their heads or crossing in front of their bodies. Mickaella Dantas uses her two crutches as extensions of her arms creating her own geometries to stunning effect.

At only 20 minutes, Set and Reset/Reset is like a whirlwind, a dance the lightness of which belies its intricacy and the split-second precision it requires of its dancers.

Last Shelter, presented after the interval, is an altogether different proposition. 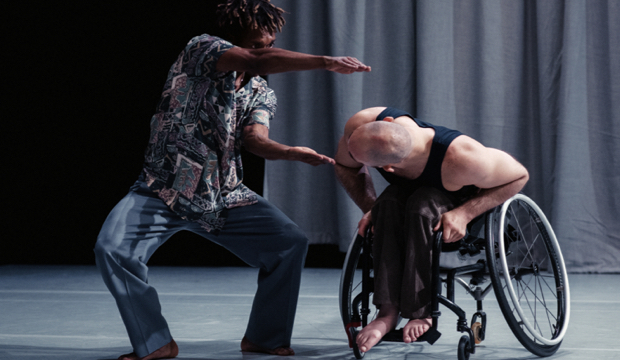 Ihsaan de Banya and Joel Brown in Candoco"s Last Shelter. Photo: Camilla Greenwell 2021
Relying to a large extent on improvisation, both in movement and in brief spoken stream-of-consciousness interludes, each performance of Last Shelter is unique; but I suspect it’s rather more interesting to dance than to watch.

The backdrop is a curtain, the centre of which is gathered halfway up to provide what could be the entrance to the last shelter on the stage. One by one the dancers come on carrying various pieces of furniture – three blue chairs, a microphone, a long Formica table – which throughout the piece’s 40 minutes they arrange and rearrange obsessively to no discernible effect.

The dancers are aware of each other but for a long time barely touch, until the very last section, where Joel Brown, now off his wheelchair, rolls on the floor in a grappling, very physical, encounter with Anna Seymour.

This is heavy-duty dance making, a practice which Durning calls 'non-stopping.’ Her work was memorably described by The New Yorker as having both 'the potential for philosophical revelation and theatrical disaster.'

On this showing, it fell between the two; but this is not to say that the dancers of Candoco didn’t put on a tremendous performance. They did.