BalletBoyz Dance Their Own Work

BalletBoyz talk to Culture Whisper about their new showThem/Us, and the process of creating the very first work choreographed by the dancers themselves 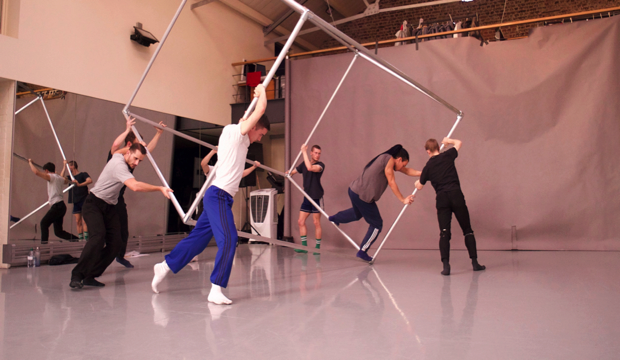 BalletBoyz in rehearsal for Them (c) George Piper
‘Firsts’ are always exciting, and BalletBoyz are in the throes of a challenging first time: the dancers are themselves choreographing a work that will be presented alongside that of a well established choreographer, Christopher Wheeldon, in a new show entitled Them/Us.

‘I would say it feels much more natural for us to create that way,’ dancer Bradley Waller told Culture Whisper. ‘It’s good to do something with Christopher Wheeldon, because it pushes us in ways that we wouldn’t push ourselves. He comes from a technical, balletic background, so it’s good for us as contemporary dancers to work that way.’

His colleague Matthew Sandiford, know to all as Sandi, and the young man with the most engaging smile you’re ever likely to see, joins in:

‘It’s also different because he comes in with an idea, with an image of what the work is going to be like, he knows how he wants the steps, whereas when we’re creating we’re a bit more in the process of, oh shall we try that? how about something different?’ 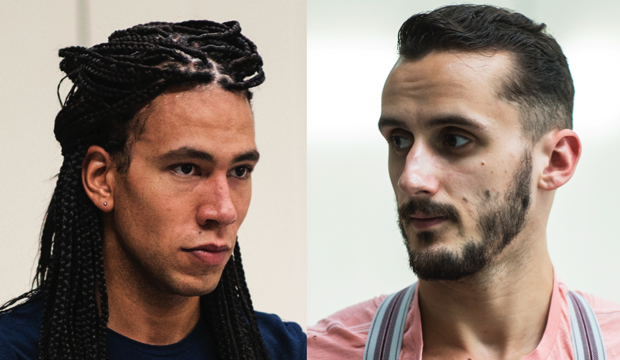 We talked at BalletBoyz’ Kingston HQ during a break between rehearsals. That morning Culture Whisper had watched a rehearsal of Us, Wheeldon’s extended version for six dancers of what started life last year as an extraordinarily intense, mesmerising duet. 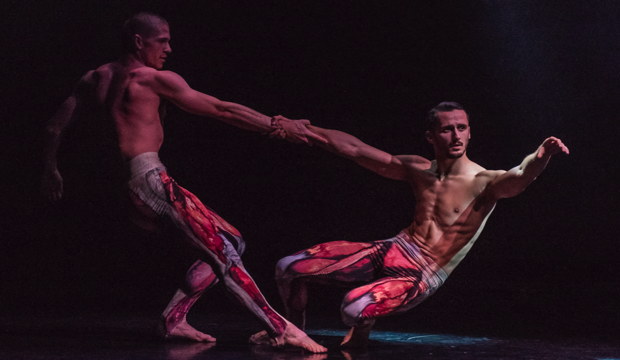 The concentration in their spacious, sunlit rehearsal studio was absolute. Not even the clattering of a company employee dragging heavy suitcases from studio to hall or the music from a nearby class seeping in through the momentarily open door distracted the dancers.

While Bradley Waller and Harry Price, immensely expressive dancers both, perfected the duet that remains the centrepiece of Us, the other dancers worked by themselves on the new sections of the choreography, before the whole piece came together under the watchful eye of Rehearsal Director Charlotte Pook.

The coordination between these dancers, their absolute mutual understanding on stage is one of the hallmarks of this all-male company and one of the reasons why watching them dance is so exciting.

BalletBoyz: Uniformity v Individuality
So, it comes as a bit of a surprise to learn that in real life all six dancers are very different from each other. Furthermore, they wanted their individuality to come across in their first choreographed work, Them, to establish a contrast with the uniformity imposed by Christopher Wheeldon’s Us. Sandi put it this way:

‘I feel that we don’t necessarily have separate identities within Chris’s, so I think it was always a thought in our minds whilst creating Them that we wanted it to be a lot about the individuals, a difference in going from this uniform state to the freedom of personality.’

Them was originally billed as an interrogation of how we see each other, but it’s developing into something a little more fluid, said Bradley:

‘I guess if you were to ask any of us, we would all have very different interpretations (…) For me, when I’m dancing the piece, I don’t feel there’s a narrative as such, a story that runs all the way through, it’s much more abstract than that.

‘Very early on in the process we played around with this idea of it being like an album, so the same as an album, you have that one piece of work, but it’s comprised of many different factors. So, it’s like there are chapters, short stories almost from each person, that kind of run through the whole thing. They only work when they’re all put together.’

Sandi joins in: ‘In the same way as us as dancers, I suppose.’

BalletBoyz' Them: A Full Company Project
For all that, with creation being such an individual process, and mindful of the saying that ‘too many cooks spoil the broth,' we were interested to find out a little more about how the six dancers went about jointly creating that ‘album.’

Sandi acknowledged that ‘you’re always going to have those moments when it’s tricky’; but he pointed out that Them is a true company project, with both directors, Michael Nunn and William Trevitt, rehearsal director Chalotte Pook and composer Charlotte Harding being intimately involved in the creation process.

‘It’s been really helpful to have the directors about, to have Charlotte there to be an outside eye, because it’s very hard to see what things look like and get the idea of them when you’re involved; but it has helped that we are so close and understanding with each other.’

Bradley: ‘For us as a group it’s been a huge learning curve, I feel we’ve learnt a lot about ourselves, as dancers and artists. I think everybody can become quite precious of their ideas, and it’s having that capability to have an idea but then be able to let it go; and if it changes and the group offers something else, to be able to let go of your idea instead of clinging on to what’s in your mind.

‘I found something I kept on saying to myself during the process was that, just because I think it, it doesn’t mean it’s right.’

What Them will look like as a finished product, we couldn’t tell you, except to say the dancers will share the stage with a moveable metal frame: 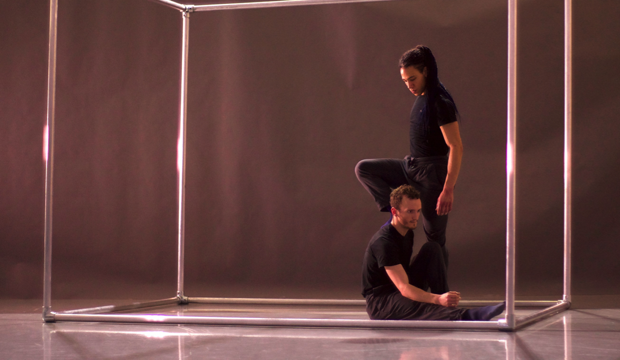 BalletBoyz in rehearsal for Them (c) George Piper

‘The cube was a new idea that Michael [Nunn] and Billy [Trevitt] introduced,’ Bradley explained. ‘It threw a curve ball for us almost, so it was like a new challenge that we could kind of tackle, so it kept us on our toes.’

How well BalletBoyz tackled that challenge we’ll all be able to judge for ourselves very soon. For our part, we can’t wait…

BalletBoyz' Them/Us is at Sadler's Wells 5 – 9 March 2019 and on tour until 28 April.
The show will be at the Churchill Theatre, Bromley on 18 March
Richmond Theatre on 6/7 April
ArtsDepot on 25 April