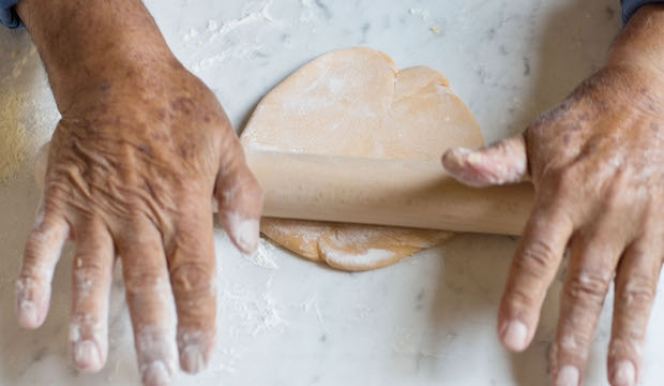 Not surprisingly, the focus of Antonio Carluccio’s Pasta is Italy’s most iconic dish. The chef gives us a step-by-step guide on how to make fresh pasta, offering a masterful blend of traditional (spaghetti aglio, olio e peperoncino) and unusual (chocolate fettuccine) recipes.

This is the basic recipe, which will make enough pasta to feed about four people. I said earlier that you need roughly 100g flour and an egg per person, in which case you might think the recipe below would serve only three people. However, if you do your maths – the 300g flour plus three eggs (roughly 50g each) – it all adds up to 450g, which is plenty of pasta for four people.

You can vary this fresh egg pasta recipe by adding other colouring ingredients. When you add one of these, you will have to be careful to keep a balance – leave out an egg perhaps, or add more flour – just to keep the proportions even, and avoid too wet a mixture.

Sift the flour onto a work surface, forming it into a volcano-shaped mound with a well in the centre {1}. Break the eggs into this well and add the salt {2}. (Add the colouring ingredient now if using.) Incorporate the eggs into the flour with a fork and your hands, gradually drawing the flour into the egg mixture until it forms a coarse paste {3+4}. Add a little more flour if the mixture is too soft or sticky – or a little water if the mixture is too dry. Using your knife (or a spatula), scrape up any stray pieces of dough.

Before kneading the dough clean your hands and the work surface. Lightly flour the work surface, and start to knead the dough with the heel of one hand as you might bread dough. Work the dough for 10–15 minutes until the consistency is smooth and elastic {5}. If you have dough sticking to your fingers, rub your hands with some flour. Wrap the dough in clingfilm or foil and leave it to rest for at least half an hour.

When ready to (rock and) roll, lightly flour your work surface again, and your rolling pin. Gently roll the dough out from the middle of the dough, rolling away from you to take the thickness away from the centre, and rotating it in quarter turns {6}. As you roll, stretch the dough using the rolling pin, and turn the sheet of rolled dough over every now and again in order to keep it all even. Keep everything well floured to avoid sticking.

The thickness of your dough will depend on the pasta shape you are using: anything from 0.5mm to 3mm. In general the larger the shape, the thicker the rolled pasta: lasagne is generally quite thick, but then again mandilli de sea, which can be as large in surface area as lasagne, has to be very thin indeed. The pasta for filled pastas has to be thin, because there is so much folding and sealing, you don’t want great lumps of thick pasta; and the more delicate the filling, the thinner the pasta casing. You will have to practise, and use your common sense, and follow the recipes! Pasta can be quite tricky – but to encourage you, not all Italians know as much as you do now!

If you are making filled pasta go straight ahead and incorporate the filling as in the chosen recipe, while the pasta dough is still malleable. This is better than leaving the cut pieces for a while, when a moist filling might seep through the pasta or indeed perforate it. Dust the shapes with semolina flour to help prevent sticking.

If you are making flat pasta or shapes, cut them out and leave on a clean tea towel to dry for about half an hour before cooking or storing. Coil long pasta into nests first, as this makes the pasta easier to handle once you come to cook it.

Blend all the ingredients together in a food processor until you have a homogeneous dough. Lift out, and ‘knead’ the dough by putting it through your pasta machine. Divide the dough into pieces (follow the machine instructions). Put one part of the dough through the steel rollers with a maximum aperture of about 1cm. Repeat this with the same piece of rolled dough, while reducing the size of the aperture between the two rollers. Being forced through a smaller gap, the pasta dough is worked more, becomes thinner, and more silky. The ultimate width of 1–2mm produces a long band of pasta of about 15–18cm wide. Cut into lengths of about 30cm.

You then use the machine cutting tool to make lengths of tagliatelle, say (the widest cut), or tagliolini (the smallest cut). Mix in a little flour, roll the strands into nests, and spread out on a cloth to dry as before.