Stephen Fry and the Academy of Ancient Music, Barbican

Words and music combine when the writer and actor Stephen Fry joins the Baroque specialists AAM to launch its 2019/20 season, with Beethoven and Dussek

The launch party in concert form starts with the option of a wine-tasting before and after the show, courtesy of Berry Bros and Rudd, and dinner with some of the artists.

Also on the programme, the mighty Beethoven Mass in C, featuring the Choir of the Academy of Ancient Music. Composed by Beethoven's Czech contemporary, Jan Ladislav Dussek, it is a full-blooded piece that looks ahead to the passionate romanticism of Chopin and Schumann.

The Academy of Ancient Music was founded by Christopher Hogwood in 1973 and remains at the forefront of the worldwide early music scene more than four decades on. The orchestra will give concerts at the Barbican throughout the season 2019/20.

AAM's instruments are those that 18th- and 19th-century composers such as Beethoven would have recognised. The strings, woodwind and brass have a a distinctive edge and directness of tone, which leans to very exciting music-making.

The 250th anniversary of the birth of Beethoven will be marked in concerts across London this year and next. Here's a chance to celebrate early, in style. 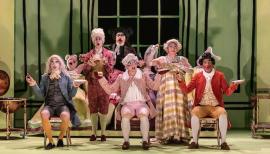