Get the Best of London Live, Culture and Style
Cinema

'It's a good choice'

So begins the trailer for Star Trek Beyond – and they're quite right of course, it is full of good music. So good, in fact, is the score by Oscar-winning composer Michael Giacchino, that the Royal Albert Hall is screening the film before the Royal Philharmonic Concert Orchestra being conducted by Ernst Van Tiel.

This third film from the Star Trek revival features an ambushed crew, caught out by a merciless enemy Krall, and find they have to survive on a hostile and unknowable distant planet. Keep a close eye out for Idris Elba in the interstellar mix. Michael Giacchino's score lends all that alien action a greater sense of expansiveness and energy, in a film that takes the franchise to new frontiers.

Star Trek Beyond – In Concert will be screened in the Royal Albert Hall, as part of the Star Trek weekend also featuring Star Trek – In Concert. See the full list of films in concert here. 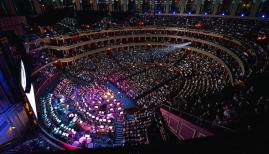