Newcomer to music or regular concert-goer, everyone is going to learn something from Beyond The Score ®

With the help of the innovative director Gerard McBurney, actor Henry Goodman, singer Rodney Earl Clarke and conductor Mark Elder, the Hallé orchestra goes Beyond The Score ®, using actors, projections and live music to dig deep inside the music, see how it works, and put it all back together again.

This project was first devised by McBurney with the Chicago Symphony Orchestra, and this is the first Beyond The Score ® evening at the Proms. First performed in 1893, when Dvorak was director of the National Conservatory of Music in New York, this, the composer’s last symphony, has elements of traditional music from both the countries he regarded as home, and has been a huge success with audiences since its Carnegie Hall debut. Each of its memorable four movements was applauded at once, and the symphony has been in the concert repertoire ever since. It was last played at the Proms in 2014.

‘The people clapped so much I had to thank them from the box, like a king!’ a delighted Dvorak told his music publisher. This Beyond The Score ® exploration of this enchanted work will help explain why, and promises to be inspiring for the young musicians at home too. 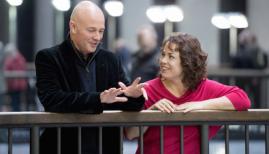