The City of London Sinfonia presents Absolute Bird: a spring concert series that celebrates birdsong at the Queen Elizabeth Hall and Southwark Cathedral

As the wondrous sounds of nature remain under continued threat, the series nestles neatly into the orchestra's wider social programme that includes a three-year residency at the Bethlem and Maudsley Hospital School, where members of the CLS are working alongside children with psychiatric problems to develop their capacity to express themselves through music.

The series also supports the release of the RSPB's new recording, Let Nature Sing, a specially-created track (directed by Sam Lee and co-composed by Bill Barclay) featuring pure birdsong that serves to underscore the ever-quickening decline of the global bird population.

Absolute Bird is taking place over three evenings this May and promises to be an uplifting, life-affirming and thoroughly poignant concert series.

Absolute Bird's grand finale, Translating Nature, is organised into three complementary parts. First, Miranda Krestovnikoff returns for a pre-performance talk on her experiences in the musical word of birds. Second, from 8:00 PM onwards, the audience will be treated to a selection of popular symphonic works that have sought to capture the sound of birdsong, most notably Ralph Vaughan Williams' beloved The Lark Ascending.

And to conclude the night and the series as a whole, CLS is partnering with vocalists Sam Lee and Alice Zawadzki in an improvised set that responds directly to a live broadcast of nightingales from an ancient English woodland. It promises to be heavenly.

Tickets to Flocks of Europe and Translating Nature, from the City of London Sinfonia's Absolute Bird concert series, are available now
by Joseph Lyons 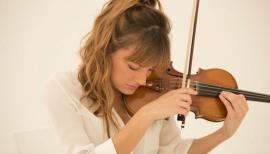