Your Name (in Japanese with English subtitles) is an anime masterpiece by Makoto Shinkai, a director dubbed 'the new Miyazaki' in reference to the genius behind Spirited Away

That’s the basic premise of Makoto Shinkai’s new animated film, Your Name. Taki (Ryunosuke Kamiki) is an inner-city boy who wants to become an architect and build Japan’s future. Mitsuha (Mone Kamishiraishi), is a shrine maiden from a small mountain town, whose family upholds the local thread weaving and religious traditions. When a large comet passes near Earth, the two youngsters begin to trade places.

Every few days they go to sleep at home, and wake up in the other person’s body. When they return to their own lives they discover just how much trouble their replacement has caused them. Taki can’t help but bring uncharacteristically male bravado to the quiet country school, while Mitsuha, as a girl in a boy’s body, effortlessly charms Taki’s alluring older coworker and proceeds to spend all his hard-earned money in overpriced Tokyo cafés.

So far, so funny. But Shinkai hasn't written a romantic comedy. Halfway through, the two suddenly stop trading places, and Shinkai is back with his most beloved theme - the tragedy of loss and separation. Add to this a subtle exploration of the fragility of human relationships, memory, and culture, and the tone of the film shifts completely, providing a strong counterpoint to the body-swapping hijinks of the first half. 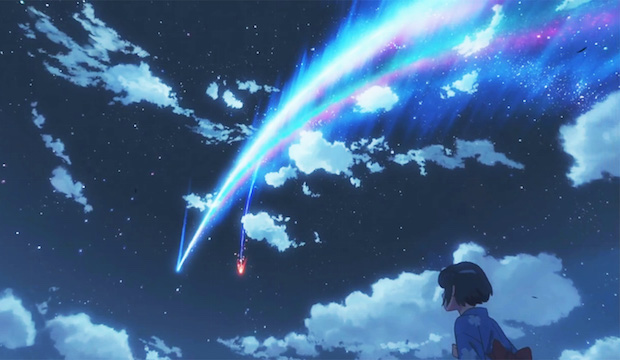 Makoto Shinkai has come a long way since his first productions, simple but heart-wrenching films like 2002’s Voices of a Distant Star. He deftly leads us through a complex plot, gripping from start to finish, both entertaining and increasingly tense. Taki and Mitsuha are charming, and their relationship intriguing - they come to know everything about each other, even though they’ve never met. The film has an elegant and highly satisfying symmetry.

But it’s the artwork that really steals the show. Not the character art, which is the same dependable but tired style we’ve come to expect from Japanese illustration, but the background paintings. They create a world so immersive, so vivid, so breathtakingly detailed and rich as is surely unprecedented in hand-drawn animation. The Shinjuku skyline and the Gifu mountains are shown with equally majestic beauty. Viewers who have spent any time in Tokyo will feel the thrill of very specific recognition; those who have not will find themselves instantly transported to Japan. The film is visually stunning, a moving painting, and the scale is so vast that no matter how many pixels you have in your television, the home release will pale in comparison with the full cinematic experience.

A must-see. You will fall in love with animation all over again.