If you listen closely to the lyrics of ‘Elastic Heart’, the 2013 whirlwind pop ballad by Sia, it might sound something like the battlecry for the wrecking-ball star in Vox Lux. Brady Corbet’s second film features original songs by the Australian singer, and feels recognisable in the striking silhouette of a powerful artist with thick skin, who walked through fire to save her life.

The ambitious and provocative film begins at the height of tragedy, with a disturbing nod to the real-life 1999 school shooting that haunts the fiction Corbet creates. A young Celeste (Raffey Cassidy) is the only survivor when her classmates and teachers are killed before her eyes. She lives, with a bullet now and forever lodged in her spine, and we have to deal with the consequences.

To reckon with the trauma, Celeste performs at the wake for those who lost their lives. She sings a song with her sister Eleanor (Stacy Martin) when words aren’t enough. Call it exploitation or see it as perversion, something clicks and the tribute to a tragedy gives way to the next part of her life when the song goes viral. Celeste is a phoenix in pain, rising from the ashes as a worldwide prodigy, shedding only glitter as she goes.

The template of an artist in agony has been recycled since time immemorial, but not with as much fascinating design as in Vox Lux. Celeste's story digs deeper than the uplifting rise-fall-rise-again structure the genre usually favours. This star is both the product and perpetrator of an ideology built on her own performative – and now – permanent identity. 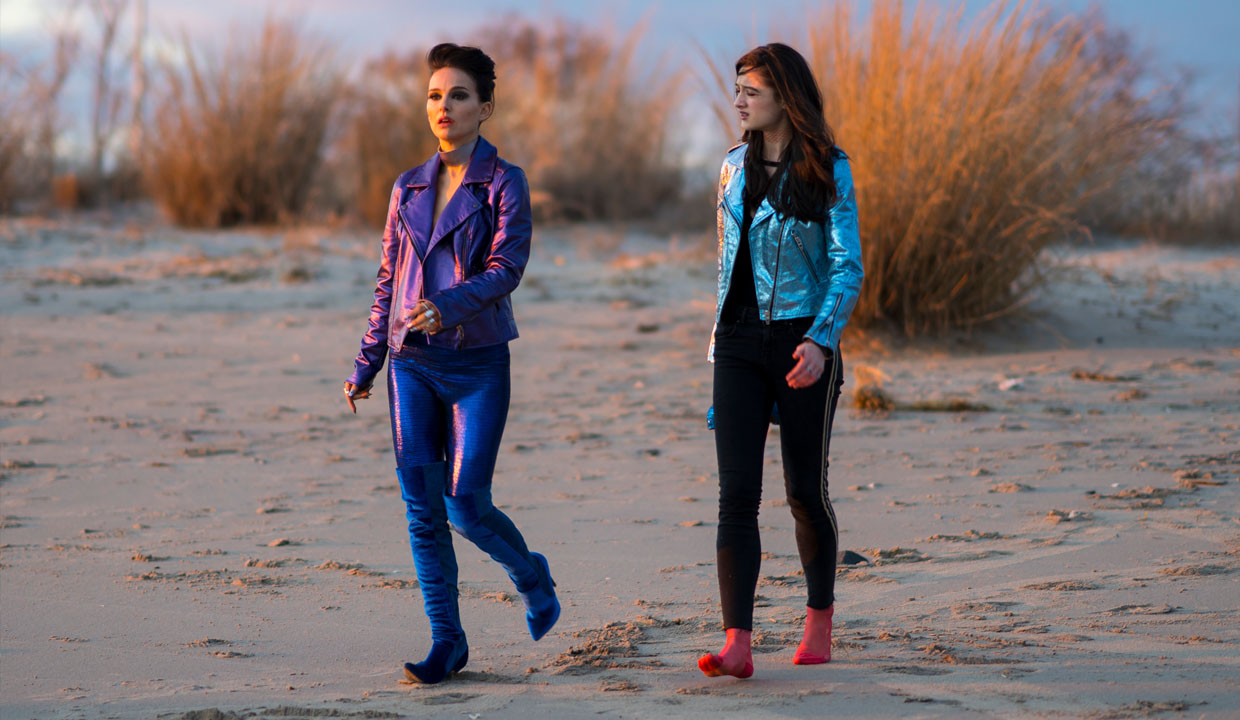 Natalie Portman is unhinged and mesmeric, Raffey Cassidy her daughter and the ghost of childhood trauma

Corbet deals in fastidious, pious levels of drama. There’s nothing subtle about the holy binary structure punctuated by death and rebirth, narrated by an ominous voiceover – almost laughable in its theatricality. But the film believes in itself almost as much as Celeste’s posse believe in their star.

All grown up, adult Celeste (Natalie Portman) is unhinged, unafraid and completely unaware of how ridiculous she looks. The sparkling uniform of her garish brand has inspired another shooting. She’s forced to talk about it in a media appearance, and unravels with pathetic and inconclusive answers.

The relationship between pop music and terrorism isn’t one that inspires healthy debate, nor one that Corbet offers a conclusive answer about. Vox Lux exposes the tenuous links and dangerous effects of art and violence, without necessarily attempting to make sense of it. The audience looks at Celeste from the outside, as she unravels in reaction to what a world of violence has made her become.

Celeste curses the people who try to love her: her sister (still Stacy Martin) who writes her songs; her daughter (also played by Raffey Cassidy); and her manager, a growling Jude Law, at once paternal and poisonous.

Her popular identity is one of propaganda; Celeste is an openly annoying but still undeniable force of nature, who inspires hope to a sea of fans and hatred to an audience that can't deal with everything she has to offer. ‘I’m the new faith’, she levels. You’ve just got to choose whether you're a believer or not.