Tom of Finland film review 4 Tom of Finland film review Matthew Robinson
Once Touko Laaksonen – or ‘Tom of Finland’ as he came to be known – settled on a method, he didn’t deviate from it. In smooth graphite, he rendered his drawings in pretty much the same neatly shaded style for most of his decades-long career. His subject didn’t change much either. It was always sex: sex between the most ludicrously muscular and preposterously endowed men the world has ever seen.

Within those borders, sure, there was plenty of variation. Sometimes the men were dressed as sailors, sometimes they were dressed in motorcycle leathers; their encounters could be in a wooded glade or a bricked alley-way. But the consistency of the particulars outweighed their diversity. There was always sex, and men having it were always square-jawed, hypertrophied, and smiling.

TRY CULTURE WHISPER
Receive free tickets & insider tips to unlock the best of London — direct to your inbox
The smile is important. No matter what a Tom of Finland man is doing – no matter how much concentration it might seem to require – he’s smirking, grinning, beaming. Laaksonen’s cartoons were about the joy of freedom. 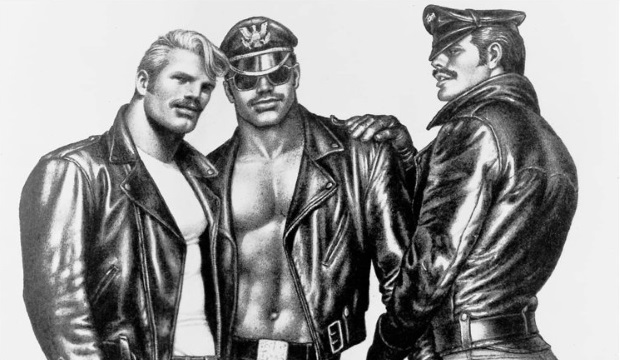 But eventually it’s apparent that Tom of Finland is less about the world of the cartoons and more about the world that necessitated those cartoons – and then had to adjust to their cheerful, unapologetic reality.

Laaksonen’s (Pekka Strang) experiences as a Finnish officer during WWII influenced his drawings in ways both obvious and subtle. Sneaking around in the bushes looking for surreptitious encounters with other soldiers, there was obviously a sense of stifling prohibition, something that chimed curiously with the sense of the forbidden represented by ‘the enemy’. The resulting imagery – of men who look like SS officers but who embrace each other with unpunished abandon – made a wonderful kind of sense, to Laaksonen and to others.

Encouraged by his dancer soul-mate Veli Mäkinen (Lauri Tilkenen) to find an American publisher, Laaksonen sees his drawings find an appreciative audience abroad, particularly in California. But even in this free-love Eden there are problems: the Tom of Finland cartoons ended up being blamed for fanning the flames of the AIDS epidemic.

Its ‘Californian half’ isn’t quite as fascinating as its ‘Finnish half’, but Tom of Finland remains a respectful and well-constructed portrait of the man who’s legacy can still be felt in the gay community.