1 CW reader is interested
The Trial of the Chicago 7, Netflix review 4 The Trial of the Chicago 7, Netflix review Euan Franklin
As with Spike Lee’s recent Vietnam drama Da 5 Bloods, writer-director Aaron Sorkin rhythmically opens his latest film with footage from the stormin’ 60s. The reality of the period moulds with the dramatisation, evoking those fraught times. Its resonance ripples into the here and now.

The Trial of the Chicago 7 follows the eight (eventually seven) anti-war protestors arrested for inciting riots during the 1968 Democratic National Convention. Footage of President Johnson, Dr Martin Luther King and Robert Kennedy are spliced with several quickfire dialogues (fictionalised) between key members of the accused.

There’s a Pythonesque joy in all the acronyms and nuances of the anti-war societies, who basically promote the same message: Stop the Vietnam War. The opening montage is dense, furious and (for the most part) accessible. Within seven minutes, you understand the personality of each splinter group of the so-called ‘Radical Left’. 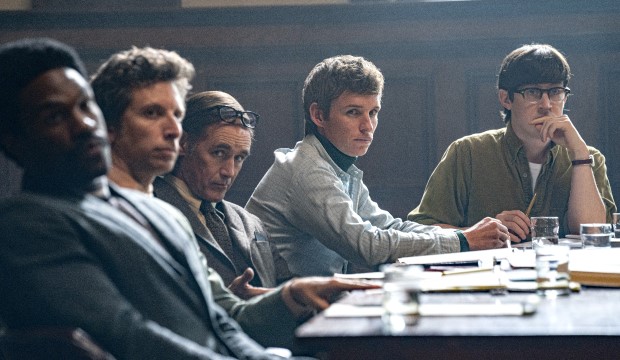 With these differences – both subtle and gaping – Sorkin avoids stereotyping these people in this epoch of American history. The anti-war side wasn’t all free love and weed. 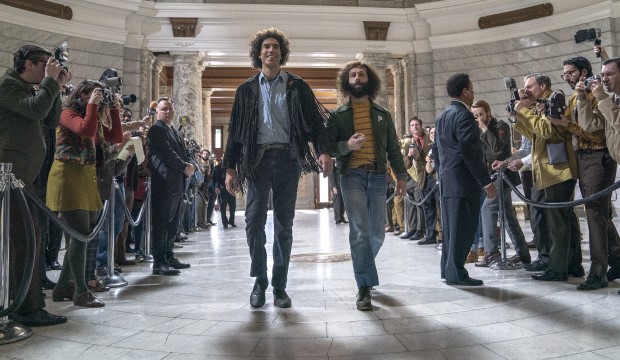 The trial process fills the second act, unfolding over five months. Sorkin naturally vacillates between witness statements and flashbacks – plunging into the thick of blood-splattered attacks with armies of police. Cue the tear gas and billy clubs. Under the near-tyrannical rule of the incompetent Judge Hoffman (Frank Lagella), ideas of fairness and the disbelief in ‘political trials’ gradually waste away.

Although the courtroom scenes often flower with intelligent and anti-establishment humour, from mispronounced names to cheeky addresses to court, the distressing moments linger and fester for longer – in particular, the treatment of Bobby Seale, who doesn’t have a lawyer. It’s often shocking to watch, showing the thuggish racism from the shadow formed after segregation was abolished.

Although Sorkin doesn’t mine this story enough, focusing instead on the all-white Chicago 7, Seale lays down a lasting imprint. Compared to his more famous counterparts, Abdul-Mateen II has less screen-time but his moving and resilient performance is easily the most memorable. 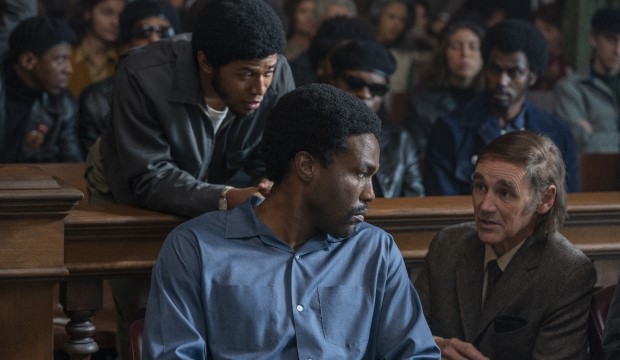 The other performances are as ecstatically and enjoyably confrontational as you’d expect them to be. Eddie Redmayne sparring with Sacha Baron Cohen – respectful vs. disrespectful – is a thunderous experience, especially as retrospective truths are flung within the arguments.

Like Redmayne, seasoned actor Mark Rylance as the defence lawyer Willian Kunstler is a paradigm of courtesy. So when he raises his voice, the room pauses in time. And this is despite his shabbiness, a contrast to his prosecutorial rival Richard Schultz, who's portrayed by a naively suited and booted Joseph Gordon-Levitt.

The Trial of the Chicago 7 isn’t as consistently sharp or musical or even as visually entertaining as Sorkin’s previous works. Often, the film has the look of a standard TV procedural. But there’s a strong political potency guiding the film, which chimes and whirrs with today's politics and injustices – all wrapped inside Sorkin’s eloquent and elevated world. By his hand, arguments between intellectuals never dry up.

The Trial of the Chicago 7 will be released in cinemas on Friday 2 October, and will be available on Netflix from Friday 16 October

The Trial of the Chicago 7