In The Lighthouse, Robert Pattinson and Willem Dafoe give the demented performances of a lifetime. Robert Eggers' maritime madness is a winner in our eyes

If the mythology that certain animals can predict natural disasters holds any water, the flock of seagulls ringing in Robert Eggers’ dangerously entertaining The Lighthouse should quickly warn viewers of the riot set to unfold.

A storm is brewing, both in the sky and on the ground, as two fraying men are cooped up on a secluded island with the task of minding a lighthouse. Gleefully bashing together sketches of horror and slapstick in almost equal doses, Robert Eggers’ refined sophomore feature has so much meat to chew on.

But meat is precisely what Robert Pattinson’s Ephraim Winslow is lacking. The newcomer under the wing of veteran ‘wickie’ Thomas Wake (a bushy pirate-shaped Willem Dafoe) is hungry, filthy, and painfully jealous that his duties are restricted to the dark and dirty corners, overshadowed by his mentor’s monopoly of the glittering centrepiece. ‘The light is mine,’ Wake taunts.

Both men have the salient physical imperfections of fossilised puppets, mirroring each other’s grubbiness encrusted into razor-sharp bone structures. As people to socialise with, they’re equally awful – Wake belongs to a culture of antiquated mermen, letting out gross sounds and smells, and seldom hesitating to yell his entitled discontent with his new employee, often in traditional tongue-twisting verse. Dafoe is having a whale of a time, as some kind of rampant toddler trapped in the body of a wrinkling patron, as puerile as he is poetic. 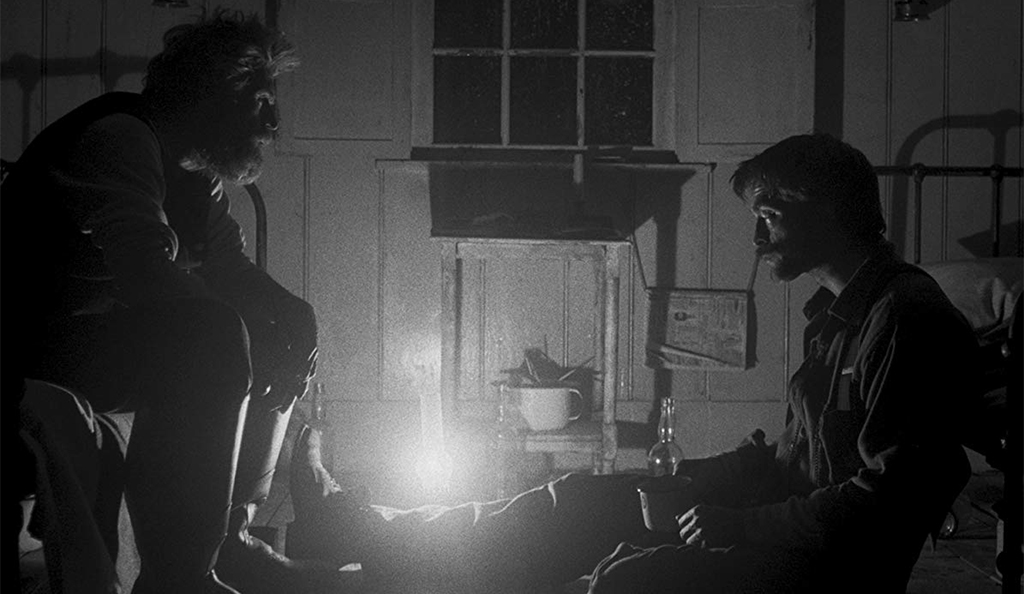 Willem Dafoe and Robert Pattinson in The Lighthouse

How exciting it feels, at the same time, to witness Robert Pattinson grow easily into one of the very best actors of our generation with this role. His body glistens while his face blackens, as isolation takes its toll on Ephraim’s livelihood, and Pattinson thrillingly relishes his character’s unravelling. His bitterness is gleeful and truly frightening in turn, as the rookie worker has the greediness and wicked lechery to manipulate emotion with as little as a twitch – and never holds back.

The Lighthouse zeroes in on these two zeroes, and Eggers (along with his co-writer and brother Max) twists a water-tight tale brimming with mythological, fantastical and even the odd sexual nightmare scenario. It’s too easy to call it a horror movie, too revealing to dig into the semantics of the film’s mind-melting oddities. There’s never a dull moment by this side of the sea.

The rich black and white design, painting velvety grey fog and coal-stained skin, knowingly harkens back to early silent movies (as does the theatrical body language of the actors), while the mood rocks from the severity of German expressionism to the slow-burn tension of Eggers’ debut, The Witch. But then the journey up to the light also spirals directly down to hell, as floods of terror, absurdity, salaciousness, and poetic existentialism swill around the story too. This merriment is demented, making the end product completely transcendent.

Solitary confinement makes people do desperate things. As Ephraim and Thomas grow closer, questions of sanity and superiority become knottier, and claustrophobic cacophony reigns supreme. The Lighthouse sometimes has the playfulness of a perverted nursery rhyme, but its lifespan will certainly survive much longer. The rest of this year’s titles will have to paddle furiously hard to try and compete with the brilliance of this scary, sweaty, silly sensation.