Following the wild success of The LEGO Movie and spin-off The LEGO Batman Movie – both of which received rave reviews, exceeding the expectations of audiences, critics and probably the producers themselves – the team have returned with another reeling and rollicking sequel.

TRY CULTURE WHISPER
Receive free tickets & insider tips to unlock the best of London — direct to your inbox
This time, we are transported to somewhere in East Asia. We follow six teenagers who have been taken under the wing an old master, voiced by (surprise, surprise) Jackie Chan. Now qualified ninjas, the six ride super-vehicles and hop on dragons to fend off monsters attacking the distant land of Ninjago and its capital.

There is a complication though: the evil warlord, Lord Garmadon, voiced by Justin Theroux (The Girl on the Train), who is besieging the city and is the father of one of the ninjas, Lloyd (Dave Franco). The latter featured in 21 Jump Street, which was developed by the same producers of this film and should give you an idea of the calibre of comedy in store.

Among the actors giving voice to the animated, plastic heroes are Micheal Peña (American Hustle, The Martian), Kumail Nanjiani who recently put in a star turn in refreshing rom-com The Big Sick, and Peabody-award winning SNL extraordinaire Fred Armisen.

It promises to be one of the biggest and best action-comedy releases of the year. 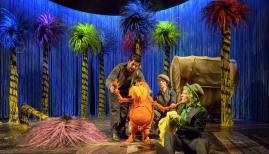