Robin Campillo’s new film is more overtly political than the ones mentioned above, and that’s because it engages directly with political activism. It follows the exploits of ACT UP (AIDS Coalition to Unleash Power), a real-life direct action advocacy group with a laudable mission: bringing the horrifying impact of the AIDS pandemic to the attention of the public, as well as those who had the power to mitigate it.

Campillo himself was a self-described ‘ACT UP militant’ in the 1990s, and 120 Beats Per Minute is a recreation of that time and the heated, high-stakes atmosphere that permeated it. The public of the time are decidedly unenlightened, with a general attitude towards HIV and AIDS of indifference or deep suspicion, and the pharmacological companies are politely complacent in a way that reveals their deep disdain of the people they could be helping.

Faced with ignorance and hostility, ACT UP fight back with conviction. Their protesting tactics walk a razor’s edge: they have to be disruptive enough to break the silence that surrounds the AIDS crisis — their motto is ‘Silence = Death’ — but not so aggressive that they antagonise the very people whose alliance they need. 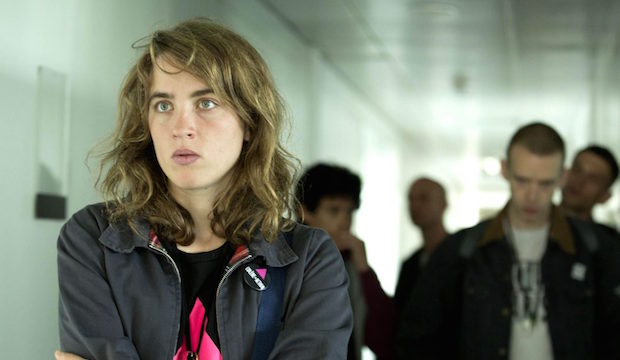 Their negotiation of this fine line is the subject of the film’s first two acts, with the majority of screen-time taken up by ACT UP meetings where protests are planned, debated, and dissected. It’s here that you can tell Campillo made 2008’s The Class. 120 BPM shows the same ability to take a room of arguing people and make it exciting as well as (importantly) comprehensible.

The protagonists eventually emerge as Nathan (Arnaud Valois), a handsome HIV-negative newcomer, and Sean (Nahuel Pérez Biscayart), a wry livewire who’s been positive for years. Eventually, the action shifts away from the scrapping of the debate chamber and focuses on the burgeoning relationship between the two young men, and the film’s tone becomes more elegiac: Sean’s disease is making his time with Nathan increasingly short.

In its final act, the film becomes a long deathbed scene, and it’s not a comfortable watch. But, then again, 120 Beats Per Minute is a sort of belated protest on behalf of those for whom advances in treatment came too late. ACT UP broke into offices and threw fake blood around; Campillo’s film has a less sensational but probably more affecting way of bringing home the tragedy of AIDS. It shows things unflinchingly.