Food and film fuse at this immersive new experience: Michelin star dining meets Helen Mirren in a decadently fitted out screening room at Islington's Screen on the Green.

Silver Screen Cuisine: The Hundred Foot Journey Silver Screen Cuisine: The Hundred Foot Journey Caroline Halstead
On 21 and 22 April, Islington's Everyman Screen on the Green will be teaming up with Great British Chefs and Celebrity Cruises to lay on an immersive culinary screening of The Hundred-Foot Journey.
Pascal Aussignac and Alfred Prasad, both Michelin-starred chefs, will be masterminding the event, which will include a cocktail and canapé reception at the cinema, before moving into the auditorium which will be decked out lavishly according to the theme.
The first time that food and cinema have been combined to such an extent, Silver Screen Cuisine will be a long way from the familiar filmgoing territories of popcorn and pick-and-mix. The hundred year old Everyman auditorium has the perfect air of old-guard luxury to complement the occasion, which has been curated, say the chefs, without being too prescriptive, nor compromising on flavour with a number of emerging themes and experimental dishes that aim to make guests truly feel the food they're seeing.
About the chefs
Aussignac, of Club Gascon and Prasad, former Executive Chef at Tamarind, are expertly placed to represent the food of France and India, and if you haven’t yet seen The Hundred Foot-Journey (or even if you have) this is a great opportunity to experience the heightened inter-continental atmosphere of the film with some specially curated dishes. 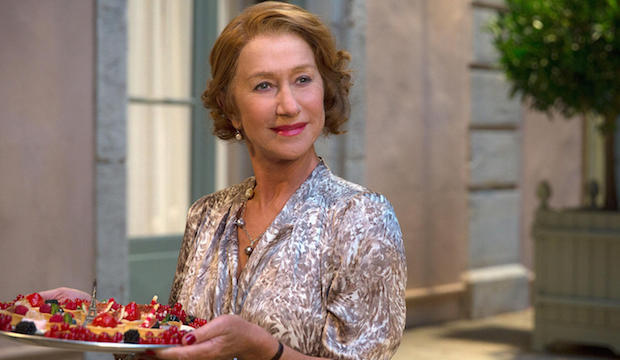 Helen Mirren in The Hundred-Foot Journey (2014)

The menu will, as expected, present a fusion of French and Indian fare in keeping with the film's subject.
The Hundred-Foot Journey, released in 2014, follows an Indian family who open a restaurant directly across the street from an upscale French restaurant, owned by a haughty Madame (Helen Mirren). The two polarised restauranteurs then battle it out for supremacy over their small Alpine town.
The relationship between Aussignac and Prasad is, thankfully, somewhat more amicable than their on-screen counterparts. They've spent a fair amount of time working together in the past (a chef's boot-camp sounds suitably intimate) and both have expressed their excitement at what they hope will be a true marriage of their culinary cultures.
On the agenda
The event will feature an old fashioned interval, as well as (not to give too much away) some themed entertainment on stage during the break. With plenty of small dishes on offer, the evening will be a chance for cinephiles to enjoy a social experience as well as trying the dishes of these two very different and very confident chefs.
As well as planning the menu and preparing the food, the two chefs will be on hand at the event to discuss the film as well as their personal passion for innovative cooking.
Tickets for Tuesday 21st have already sold out, so we'd encourage you to book as soon as possible for this one-off special event – fusing love of cinema with passion for haute cuisine, it's sure to be a big hit among Islington locals and food-loving Londoners.