The director of Boyhood and the Before trilogy takes on a staggering 20-year project: an adaptation of Stephen Sondheim's Merrily We Roll Along with Beanie Feldstein and Ben Platt

Next up? A staggeringly ambitious musical adaptation: Linklater will be helming a big-screen version of Stephen Sondheim's Merrily We Roll Along, filmed over 20 years. Production has just wrapped on the first segment of the film, but there's still a long way to go.

In terms of his stars, Linklater will be joined by two rising stars both on Broadway and in Hollywood, who also happen to be best friends: Ben Platt – he of The Book of Mormon, Pitch Perfect and Dear Evan Hansen (for which he won a Tony Award) – will play Charley Kringas, opposite Beanie Feldstein – she of Lady Bird and Booksmart as well as Hello Dolly! on Broadway – as Mary Flynn.

The pair will also be joined by Blake Jenner, who made his name as the winner of reality TV series The Glee Project, which led to a supporting role on the Ryan Murphy series. Jenner has since starred in American Animals and The Edge of Seventeen, before working with Linklater for the first time on the 2016 college comedy Everybody Wants Some!!.

Jenner will be playing Franklin Shephard, the lead character in Merrily We Roll Along – a Broadway composer who turns his sights to making movies in Los Angeles. Charley is a lyricist, who partners with Franklin, and Mary is a writer and theatre critic.

Details remain scant as well as, naturally, a release date. Stay tuned as this project develops over the next days, years, decades. 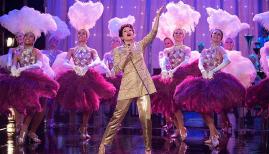 New movies for musical lovers to bookmark in 2019