Legally Blonde 3: what we know so far

Almost two decades after the first film, Legally Blonde is returning for a third instalment part-produced by Witherspoon. Hopefully it will stand up to feminist prods

The early-2000s romantic comedy spawned a sequel and a musical, which won three Olivier Awards on the West End. But with its blondes-can-be-clever linchpin, the story and its message need updating for the present day – it will be a challenge to see how this develops 19 years later.

Reese Witherspoon plays Elle Woods, fashion-conscious sorority darling and Harvard Law School standout, in the first two films. She confirmed the character’s next appearance on Instagram last summer, posting a video of her sunbathing on a pool lilo and clad in Elle’s signature pink sequinned bikini.

Further details have since emerged about the next instalment, among them that Witherspoon’s own production company, Hello Sunshine, will be collaborating on the film.

Witherspoon herself will star, off the back of her role in critically acclaimed HBO series Big Little Lies. Jessica Cauffiel and Alanna Ubach, who played Elle’s faithful comedy sidekicks in the first two films, will also reprise their roles according to IMDb.

Original screenwriters Kirsten Smith and Karen McCullah have produced the script for the new film, and Witherspoon is set to collaborate on production with Legally Blonde veterans Marc Platt and Adam Siegel.

Almost two decades later, and still with much of the same team on board, hopefully Legally Blonde 3 will deliver fresh takes and feminist mores to update this well-watched comedy. 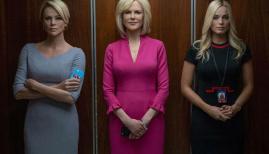 Bombshell: Charlize Theron, Nicole Kidman and Margot Robbie in Fox News drama
Sign up to CW’s newsletter
By entering my email I agree to the CultureWhisper Privacy Policy (we won`t share data & you can unsubscribe anytime).