The I Am Not a Serial Killer book adaptation is a grisly, sympathetic indie-horror

As the eponymous not-killer, Records plays a friendly neighbourhood sociopath, a character easily recognisable to anyone that has tried to power through Dexter or Luther. This inevitably leads to a series of played-out, fill-in-the-blanks moral dialogues: ‘You display sociopathic tendencies, but you’re a good person,’ accounts for a good half of the lines from John’s therapist (Karl Geary).

It can be hard to tell when this film’s tongue is in its cheek. John works in the family morgue, where he has free reign to indulge in his ghoulish interests. He prods, preens and otherwise palps the various victims of the massacre blighting his small, rust-belt community. As a portrayal of mental illness, it’s far from nuanced but never insensitive. When his anxious mother (Laura Fraser), the local funeral director and coroner-at-large, snaps at John for taking a professional interest one of the rapidly-cooling victims – ‘This is all my fault…’ – there’s some serious tonal dissonance. The dynamic verges rather quickly on Too Feckless To Notice We Needed To Talk About Kevin Before We Employed Him At The Corpse Factory.

But this is one of the charms of this lo-fi indie flick. The poker-faced deployment of genre tropes always seems to teeter on the edge of parody, but never quite falls into self-deprecation. From the wailing, seventies-era heavy metal of its opening track to the lurid magenta of its wavering title credits, director Billy O’Brien has taken great pains to give his film the veneer of a straight-faced horror flick. Sparingly used gore is lovingly rendered in ketchup and giblets, overlaid with a grisly sound palette of squelches, spatters and splats. Familiar scenes from high school life – a meeting with the principal, a bully in the cafeteria, a school dance – might even lead the unwary viewer into thinking I Am Not a Serial Killer is pot-boiler fare. 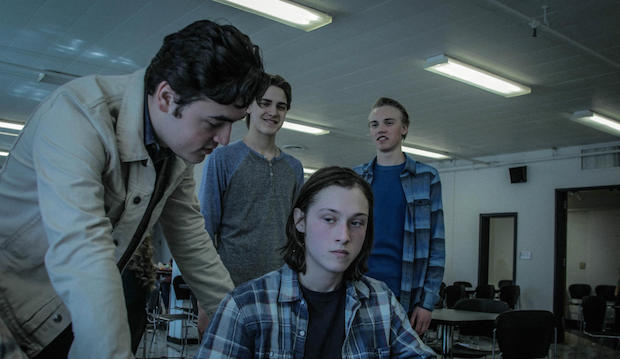 As the plot takes a supernatural twist, quickly descending into gloriously farcical black comedy, almost every investment in the clichés of its opening act is cashed out. The tiny wholesome town in flyover country devolves into an uncritical mob as mass paranoia sets in. John’s gormless teen/affectless monster act persists in the face of the paranormal. His amateurish attempts to hunt the hunter make him easy to root for.

Performances from the supporting cast are strong across the board, particularly Back to the Future’s Christopher Lloyd as John’s adorably creepy old neighbour. For his part, Records rises above the fairly limited options the script affords the lead role, grabbing a few belly laughs with a nonplussed, toothy grin as a universal response to trivialities and trauma alike. But it’s the film’s foray into the fantastic that’s going to be the make-or-break moment for audiences. For a viewing public stuck in limbo after the end of Stranger Things, I Am Not a Serial Killer delivers a much-missed fix of small town terror and otherworldly encounters against a score of soaring orchestral synth.

Alongside a wickedly macabre streak of black comedy, the film manages to serve up some genuine thrills as the cat-and-mouse antics making up the meat of the action develop. If you’re willing to accept its opening gambit and follow it down the rabbit hole, there’s a lot to love about this surprisingly clever killing spree.