‘For one last moment, everything was so glamorous and cool’. Destiny, Constance Wu’s character in Hustlers, levels with the audience roughly a third of the way into the film. From a distance, the glittering lights of writer-director Lorene Scafaria’s latest film, based on the viral New York Magazine article, suggest a hedonistic picture of vice and excess, one that lives for the night and gives its guests the best time of their life.

It’s not that this doesn’t happen, but it quickly becomes clear that the glitter of the dance only scratches the surface of what’s at stake. There’s a level-headed agenda at the root of this project – at once from the women making the movie as much as the ones who lived the drama in the first place. The story starts in 2007 and meets its end in 2013, spanning the rise and fall of a group of strip club employees pulling a fur-clad Robin Hood coup on their Wall Street clients, men who made it to the top of the world by stealing money and stepping over whoever they needed to. These women have come to blow their minds, and then knock them down.

Whether you enjoyed or despised The Wolf of Wall Street (somewhat uncannily released in 2013), Hustlers has come to rival and respond to Martin Scorsese’s frenetic exposé of stockbroker Jordan Belfort’s voracious lifestyle and career with the story of the women on the other side. There’s nothing performative or tokenistic about this perspective – nothing is forced in order to demonstrate how sexism functions and why it’s Bad™. No, this is a film that means business, about business – Hustlers cares about justice, independence, audacity. That’s female empowerment. 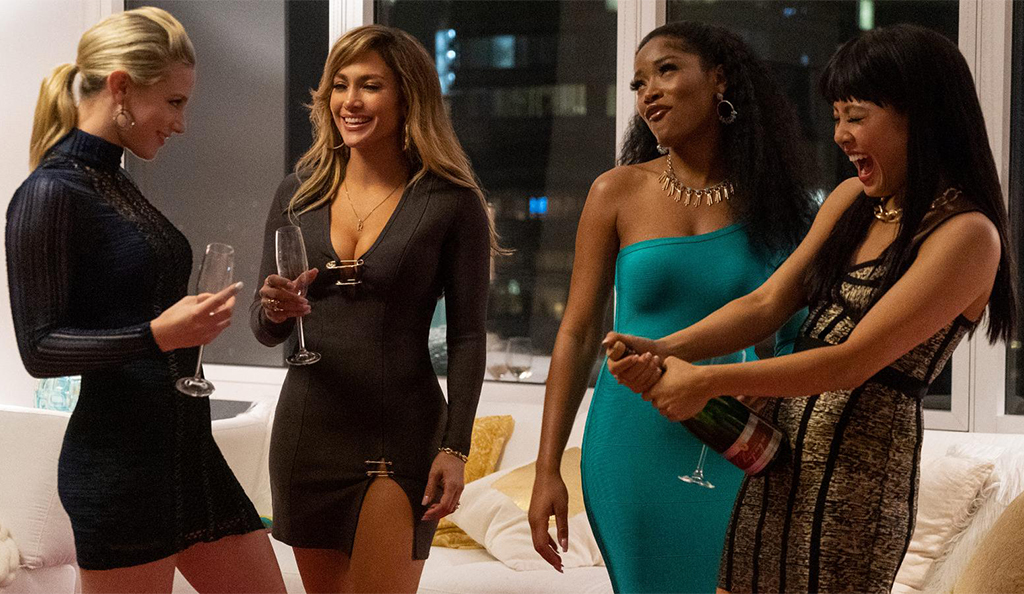 Lorene Scafaria deserves her crown as one of the most exciting filmmakers to rise up again this year, as she writes and directs a picture as sharp as it is exuberant – self-aware and sophisticated when it needs to be, white-hot and hilarious when it wants. She cast her women with undebatable determination, and it pays off – there’s incandescent chemistry between Jennifer Lopez and Constance Wu, as Ramona and Destiny respectively. The two women lead the pack (including tremendous characterisation from Keke Palmer, Lili Reinhart and, for a brief moment, both Cardi B and Lizzo) with ferocious resolve and indomitable loyalty to each other.

The film doesn’t leer into the mechanics of the profession, the scrutiny of how a person ends up in an unconventional position that could be looked down upon. Ramona shows Destiny some moves, and explains the different types of Wall Street clients. But there’s a line on how these women work, what they’re willing to do – and everyone knows when not to cross it. There’s a headstrong mission to get the job done, to invest in oneself and taking back what you deserve. Because if you don’t, someone else will.

Hustlers emits a fearless battlecry to those who have been hurt and dismissed. In this particular story, it’s about the women of the strip club, but the fire roars loud enough to transcend this world and wake up a viewer in any other situation that could feel any similar floodlit rage. It’s an educational and entertaining look at an industry so often filmed from the other end of the table – the strip club here isn’t a mistake or a distraction. It’s a playground. An office. A warzone. A sanctuary. It's magic.