“You can smell that I’m brave.” This isn’t a line too often recycled across any art form, because it’s unsettling. It has a primal, invasive quality to it, one of an attacker being challenged, and of a provoked individual seeing just how far the challenge can go. Michael Winterbottom clearly sees no land completely off-limits with his brazen satire of the super rich in Greed.

The person uttering this line is Richard McCreadie, an unspeakably wealthy man at the helm of Monda, a fictional proxy for the likes of Zara and H&M – a fashion brand boasting low-cost production, low-cost delivery, but always a high, high-earning margin for those at the very top.

Greed frames McCreadie’s cardinal wrongdoings from every angle. Winterbottom fictionalises a bolshie, brutish little man in charge of millions of pounds who has a stupendously inefficient moral backbone – but the incisive script does make you wonder whether you might have glazed over this man saying his piece on the news.

But he is, thankfully, only a figment of the imagination. Richard McCreadie (who gives *himself* the nickname Greedy) is played by a robust, uncompromising Coogan, fully committed to the loathsome tendencies of this self-centred specimen. The initial set-up frames Greedy’s preparations for his 60th birthday party on the island of Mykonos, erecting a lavish ode to Gladiator (the film that told us “A Hero Will Rise”) across the island.

Workers work fast, and cheap, endless swathes of fabric hide the ugly truth of how they got shipped across the world in the first place. Sound familiar? 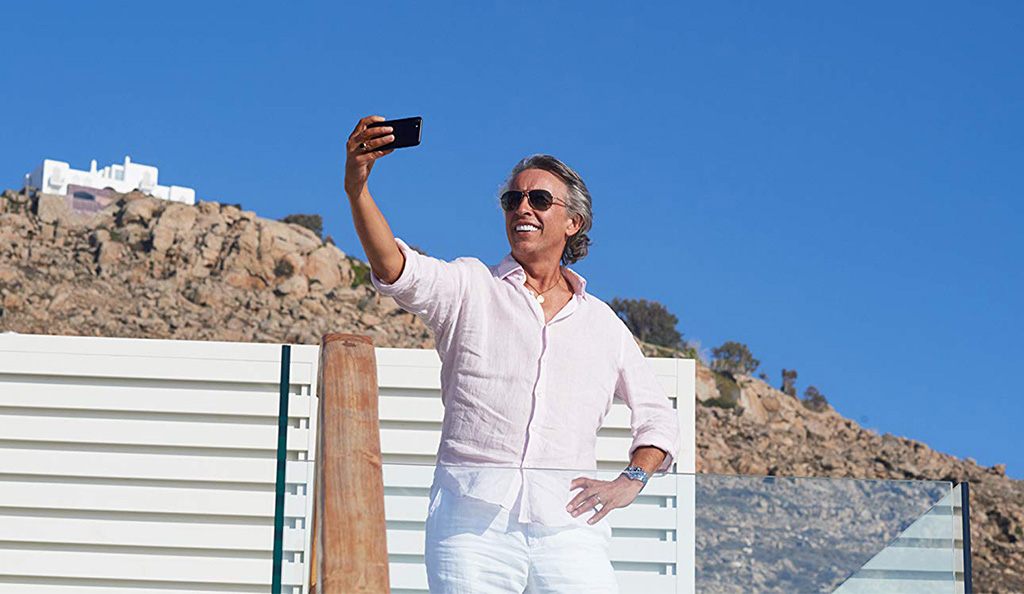 No-concessions entertainment comes from the sheer scale of the party, with eye-popping cameos (certainly showing Winterbottom’s industry connections), and pantomimic frenzy. But there is a threat looming on the beach below. Families of Syrian refugees have temporarily settled – and Richard isn’t happy.

It’s an uncomfortable subplot that seems to cross a line at first, but Winterbottom then slowly brings it into focus. All disparate narrative threads (flashbacks, a trial, the party) connect in a satisfying, sobering development. An energetic late-Britpop soundtrack fuels the picture, which slides and snaps with the nostalgic but vibrant aesthetic of a home movie. The farcical satire earns a sense of gravity, and humour gives way to silence when necessary.

Comedy is pushed to extremes, as Coogan and a solid supporting cast (Isla Fisher and Asa Butterfield have particularly rewarding moments) lean into the scathing, shameful scenarios Winterbottom writes with absolute clarity. But when the picture widens to deliver facts and point fingers at guilty parties, there’s intelligence and depth to the claims being made.

There’s no real happy ending – but enough people meet their makers to clarify the film’s stance on its depicted injustices. It’s certainly dangerous territory, but Winterbottom walks into the lion’s den fully armed.