Ira Sachs returns to Cannes with Frankie, an ensemble family drama led by Isabelle Huppert and Brendan Gleeson in the Portugese sunshine

In Ira Sachs’ 2016 film Little Men, space is essential. Not cosmic with a capital S space, but the space between people and the spaces that contain them. It’s a small story, underpinned by a real estate pricing issue that uproots, converts, demolishes and rebuilds relationships all under the shadows of skyscrapers.

When Jake and Tony (two young friends caught in an inflation confrontation) escape from their tussling families and skateboard through the streets of New York, it’s the film taking essential breaths; deep and invigorating ,a tonic to balance the poised and pointed drama happening behind closed doors.

Sachs’ new film Frankie sees an eclectic international family, made of eclectic international actors, arrive in Sintra, Portugal. The trip has been organised by the titular star actress matriarch at their core, played by Isabelle Huppert. It’s a bold move from Sachs to fly his layered, charming but sticky stories outside of the city and in to a place that has acres of space to roam, and whilst the ensemble cast is rich in talent, they’re spread too far and wide.

The reason Frankie has performed this mediterranean act of assembly, that only Nick Fury could rival, is because she’s terminally ill. In perfect Sachs fashion, this gravity-shifting event is never a point of melodrama, or, at times, even focus. In the Sintra sun, Frankie has created an opportunity to knit together lives that had torn and pulled away from her, and despite being (apparently) one of the most famous actors in the world, in this coda for her story she doesn’t want the spotlight – but a chance to bring everyone on stage with her. 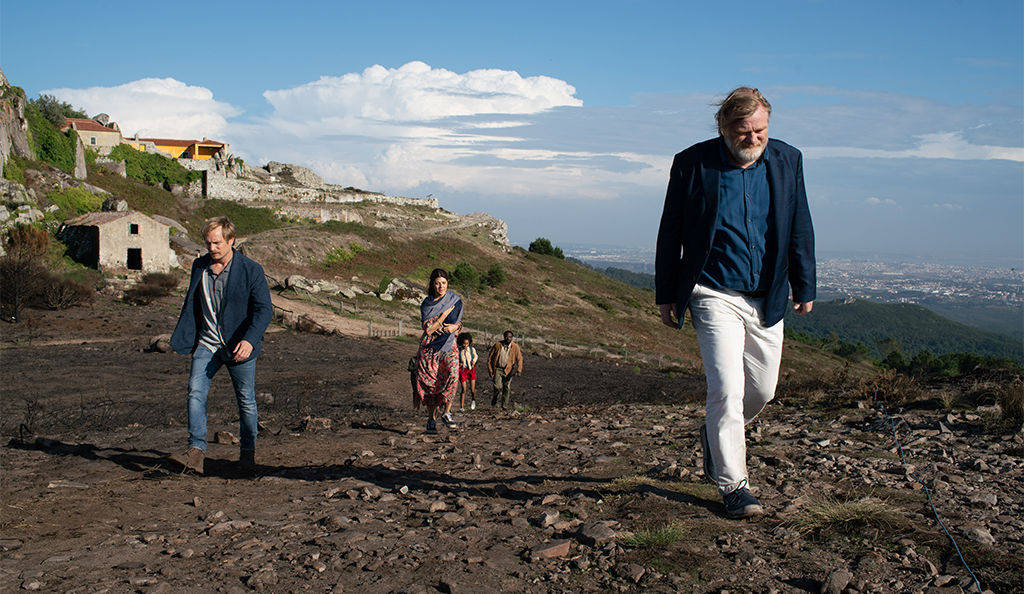 Unfortunately, this super ensemble rarely gets to be so. The plot forcefully pairs up characters, making them wander off like members of a geography trip who couldn’t pick partners. Their dialogue can feel the same, as if it’s from people who have barely met, let alone members of the same family.

Across the many paths, gardens and beautifully tiled pavilions of Sintra they split off, pair up again, then ramble off once more. They never cohere into the loveable, at times eccentric, but ultimately believable families of Sachs’ best work.

Of course this stilted delivery and distance may well all be intentional, but there’s no chance to empathise with this family that’s broken into shards, as there is rare opportunity to imagine its beauty as a whole. Perhaps in his previous works it was the city that allowed Sachs to focus so acutely on the heartbreaking and heart-soaring details of family; forcing tight rooms and tighter conversations onto people, then offering essential reprieve from both.

There are occasional moments in Frankie that do see Sachs stroll back on to his own well-trodden, but no less beautiful, pathways. Two scenes featuring Huppert and Gleeson, one at a shared piano, one in a shared bed, show the director at his intimate best. They give a reminder that in the face of eternal distance, reconciliation can be found in the briefest moments of commune. It’s just a shame that everyone else walked away.

Reviewed at the 2019 Festival de Cannes. Frankie is yet to receive a UK release date.