She first boogied to Black Flag and Talking Heads with Billy Crudup in 70s nostalgia flick 20th Century Women. Here, she grooves to the soundtrack to Saturday Night Fever opposite Jamie Bell — who gives John Travolta a run for his money.

This dancing scene comes early in the film and is the first encounter between the film’s star-crossed lovers — the chronically ill Gloria Grahame who enjoyed some fame during Hollywood’s Golden Age and her last romantic interest, Peter Turner, a humble actor from Liverpool whose memoir the film is based on.

We are charmed by the couple-to-be as they flirt, quip and bond over their love of theatre. Unfortunately, there are too many frivolous moments like this which are too content to play on the surface.

We do get to meet the parents who help to fill in some of the blanks. Peter’s parents, played by the always bullet-proof Julie Walters and a slightly more workaday Kenneth Cranham, are endearing as they fuss over Grahame when she comes to their house to rest up from her illness; the cancer that she refused to get treatment for and would eventually lose her life to.

Grahame’s own charismatic mother (Vanessa Redgrave, of course) and vitriolic sister make a brief appearance when the couple whisk themselves off to her caravan home in California.

But ultimately, these family members end up confirming what we already know: Grahame is a capricious film star and that Peter is a regular young man from Liverpool. Peter’s disclosure of his romantic history halfway through is a desperate attempt to build character interest that falls flat. 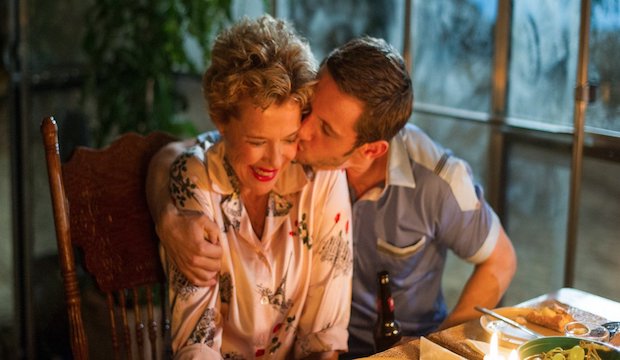 And yet, there are moments that match that early dancing scene where Bening and Bell get to show off their great chemistry and director Paul McGuigan, best known crime thriller Lucky Number Slevin, gets to display his tender side.

An intimate conversation in a New York restaurant where Grahame betrays her worry about her looks and a touching couple of minutes when the lovers act out a scene from Romeo and Juliet (which Grahame never got the chance to play on stage) stand out as little gems in what is otherwise a stylish but mixed bag of a film.

Gloria Grahame’s career sadly withered in the shadow of the inimitable Marilyn Monroe. It looks like their respective biopics will suffer the same fate. Film Stars Don’t Die in Liverpool can’t quite live up to the sparkle of My Week with Marilyn. Then again, the bar was set pretty high and not everyone’s star can burn so brightly.