For the nomad Kazakh minority in Mongolia, eagle hunting is a 2000-year-old tradition customarily passed on through generations of fathers and sons. Bell grants his audience a privileged insight into this practice, a skill that brings prestige and pride to the families, a profession that they define not as a choice but as something that ‘runs in the blood’.

Aisholpan’s story is one of a kind, and her wish to become an eagle huntress is a difficult undertaking, but she has a strong father-daughter relationship and the benefits of a supportive family environment. Bell follows her through preparation for the annual eagle hunting festival where she intends to be the first girl to compete. We witness her progress in training: from capturing her first eagle, to going on her first winter hunt. In parallel, Aisholpan is also filmed in her school setting, a significant contrast to her life at home during the weekends and her pursuit of her ambition. 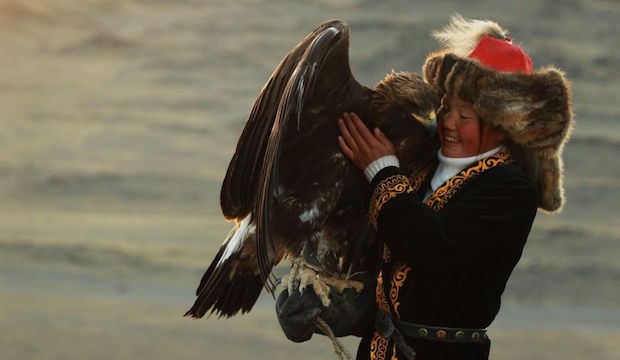 Visually, The Eagle Huntress is stunning, taking in the beauty of nature with both picturesque landscapes and close-ups of wildlife. But Bell's film is more than solely visual: it sheds light on the misogynistic and traditionalist views that still shape the practice of eagle hunting. Elders from tribes are interviewed and explain, with hilariously skewed logic, why they are strongly against the idea of women learning to hunt. Aisholpan is not only confronted with the challenge of increasing her skills as a huntress, but must also have the courage to face criticism and disapproval by many established eagle hunters.

Anyone considering the topic of Bell’s documentary to be of dubious interest can be assured: the film successfully and beautifully transports the viewer. The Eagle Huntress is truly an informative and entertaining documentary.