Mercifully, Dark Night does not recreate the shooting. The film begins in the aftermath, and builds up to a similar act of violence. Instead of the hard-edged social realism you might expect from a film tackling gun crime, its approach is soft-focused and lyrical.

TRY CULTURE WHISPER
Receive free tickets & insider tips to unlock the best of London — direct to your inbox
Essentially, the film is a series of vignettes. Following six separate characters, united only by their presence in the cinema, it showcases the half-baked hobbies and general young-adult goofing around – the life and soul of suburbia. The overall effect is mesmerising; you can feel the stupefying heat of its Floridian setting.

However, the only thing of any real distinction that rises from the swamp of these moody set pieces is the brilliant cinematography of Hélène Louvart (Pina, The Beach of Agnès) and not the ever-present threat of gun violence.

And yet, at the same time, Dark Night insists on boiling everything down to the movie theatre massacre. Scattered across the film are scenes of a visit to a gun range, an ex-soldier scrubbing his rifle, and other gimmicks that try to engage the viewer in a game of ‘guess who’s the killer?’. It does not work as a storyline or even a focal point.

Essentially, director Tim Sutton – who brought to us the equally wandering and wavering Memphis – has tried to weave an intricate tapestry and ended up with a washy watercolour.

But this is not Dark Night’s worse offence. 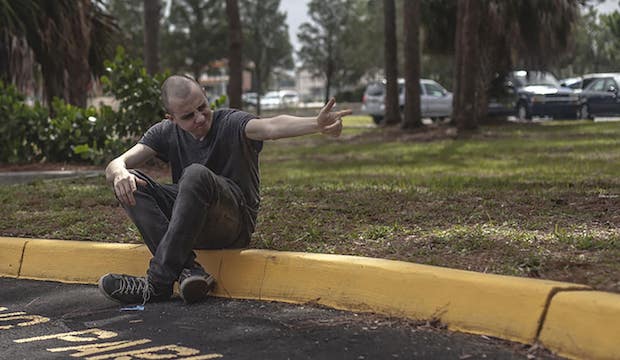 The way the string of hazy episodes lull you into an almost numbing sense of serenity suggests that – along with loneliness, boredom, body insecurity, over-stimulation through simulations etc. – gun culture is just another symptom of modern American malaise.

This normalisation of guns makes for striking cinema. But it's an irresponsible perspective. Moreover, it's naive. You can dress it up as isolation, vanity, or problems with technology, but we all know the real reason behind these tragedies: it's far too easy to get guns in America.