Miles Teller boxing movie Bleed for This is solid, satisfying, and as subtle as a punch in the face

‘It’, for Paz, was a triumphant return from a life-halting event. A real-life boxer, Paz broke his neck in a 1991 car crash and was confined to a brace, a metal ‘Halo’ screwed into his skull to keep his head still. Defying the doctors’ gloomy diagnosis, he took up fitness training while still convalescing, and went on to defend his title in the ring. As dramatized in Bleed for This, Paz’s triumph is admirable. But the script has it right. It’s all too simple.

Part of the problem is that Vinny’s a nice guy. An Italian American from a large and large-hearted Rhode Island family, he can be a bit of a showboat and braggart, but when it counts he’s stolid, patient, determined but not selfishly so, knuckling down with minimal resentment or fuss. Which is to say, he’s not the character that’s going to give us the blistering performance Miles Teller has been promising since Whiplash (2014).

We all know what that performance would look like: arrogant, rude, too clever by half, transforming insecurity into compensatory radiance – basically, an exaggerated riff on the off-screen ‘Miles Teller’ persona. But motor-mouth dickhead – Cocky Balboa – is exactly what Paz isn’t. And he’s not prone to temper-tantrums, either. When his friends and family throw him a surprise birthday party after his accident, a lesser man might have violently railed against all the false cheer, might have thrown some chairs or at least slapped the cake to the floor. Paz is sullen, but also gracious. He’s not especially tortured, outwardly or (to go by his belief in the simplicity of endurance) inwardly. 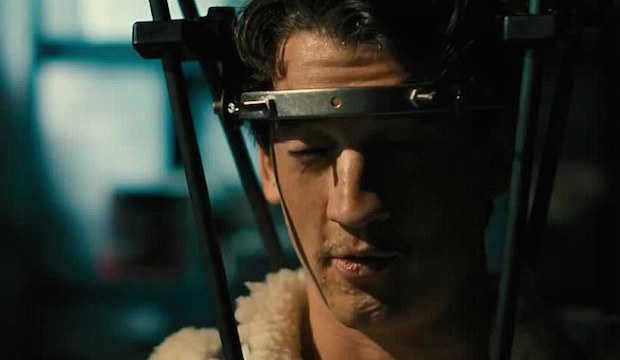 Miles Teller as Vinnie Paz in Bleed for This

His struggle is, instead, physical, and Bleed for This is enjoyable wince-inducing. Once he’s had the Halo drilled into his cranium, Paz’s life consists of gingerly moving around cramped interiors, trying not to knock his unweildy shoulder-scaffolding against anything; whenever he does, you feel the ping or clang sound-effect in your own vertebra. It’s spinal, whereas the fight scenes are visceral, winding. During one bout the only sound is of landed punches, the rest of the soundtrack muffled to make them sound especially haemorrhaging. It’s effective, and affecting in its way, but not cinematically so. Watching Bleed for This is like watching sport.

It’s possible for a sports film to be so much more, of course. Foxcatcher (2014) is also based on real events in the sporting world, but it makes something compellingly murky and possibly timeless out of the thematic ingredients (class, success, desire) it shares with Bleed for This. When Channing Tatum’s big dim wrestler smacked himself in the face, you felt the self-loathing; when Teller’s Paz does the same, it’s just actorly shorthand for ‘I’m getting fired up!’ Psychology doesn’t really come into it. Bleed For This is an entertaining celebration as one-track-minded as its hero.