Atomic Blonde is a shiny neon-lit chrome-tipped vehicle for Charlize Theron, and she drives it incredibly well – but in no particular direction

In fact, much like an Instagram feed, it rolls by like a series of arrestingly-colourful set pieces with little to connect them apart from the fact that they all happen to be in the same place and lined up one after another. It would probably be possible to watch half the film and walk away feeling just as satisfied, discarding all the half-efforts to construct something like a story in between.

But while we're here, the story is as follows: it’s 1989, the Berlin Wall is down and Lorraine Broughton (Charlize Theron), a badly-bruised MI6 operative, has just been brought in from the cold (Le Carré gets more than a nod in this plot). She is now undergoing a thorough debriefing by her chief (Toby Jones) and a CIA associate (John Goodman) about her botched mission.

The bulk of the film is a recounting of this mission: to retrieve a list containing details of every active field agent in the Soviet Union which is hidden in a watch. To capture both, Lorraine must enlist the help of another MI6 field agent (James McAvoy) who has gone rogue in the wilds of too-cool-for-school East Berlin. (The soundtrack is similarly right-on). Along the way, she rubs shoulders with a fresh-faced French agent, played by Sofia Boutella (who was a little bit more lively in The Mummy, ironically), with whom she has a fling.

While there are many twists and turns, none of them are particularly surprising. This is partly down to the fact that we never, ever doubt that Charlize Theron knows how to play the game and that she is in the lead. James McAvoy doesn’t even come close to making her quake in her boots – which is fine because Theron is very, very entertaining in them. 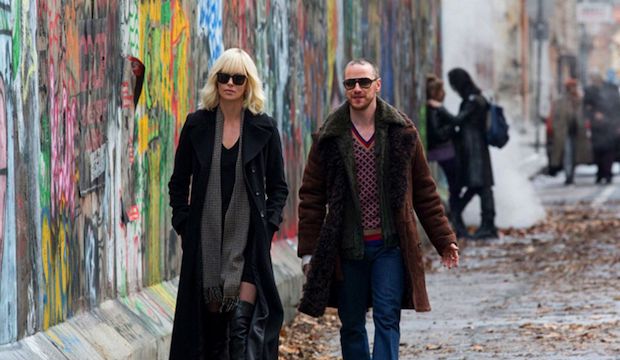 A case in point arrives just over halfway through Atomic Blonde in the form of a dazzlingly good action sequence that will dominate discussion of this film and save it from potential two-star reviews (like this one could have been). Obviously, this part of the film plays to all of director David Leitch’s strengths – a stuntman by trade and part of the directorial team behind John Wick. Even if it just the result of editing-room trickery, the seamlessly flowing section is impressive work.

However, there is only so much you can be seduced by style alone. The way Charlize Theron and her assailants stagger about in exhaustion after beating each other to a bloody pulp seemed a beautifully apt metaphor for the current state of this kind of film: tired. Very tired.

If the traditional action-thriller – which Atomic Blonde aspires to be and often apes – is in decline, then this uber-stylish film is a brilliant stop on the way down.