The Times Cheltenham Literature Festival 2014 was a classy affair, and the best contemporary authors espoused their views. 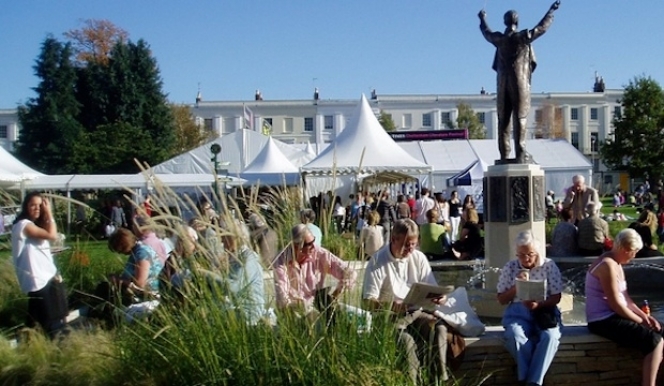 Cheltenham Literature Festival 2014: Our notes
You know you’re at a classy literary festival when you’re waiting in line to get your book signed and the stewards bring round a box of chocolates to keep everyone going. It’s a nice touch, and very Cheltenham – one of the best literature festivals, UK wide, and one of the most genteel.

With tents taking over the two elegant Regency squares in the town centre, the Literature festival settles snugly into Cheltenham life during its residency. It’s been a proud local event since its inception in 1949, making it the longest running of its kind, as well as one of the most prestigious. With the Cheltenham Jazz, Science and Music festivals also taking place during the summer, this Gloucestershire spa town becomes one of the most culturally happening places in the country for several weeks of the year.

Things got off to a great start last Friday. This year’s line-up was characterised by the worship of literary superstars, many of whom appeared early to open the show with aplomb. Day One saw Caitlin Moran and Will Self both discussing their new novels, while author of Atonement Ian McEwan appeared alongside former Lord Justice of Appeal Alan Ward, the inspiration for McEwan’s latest book, The Children Act. Pitting secular justice against religious belief, the story, McEwan says, explores ‘the gap between what is moral and what is lawful’. Despite a tense hiatus caused by an angry heckler, the discussion, like the novel, broached some big questions about adult responsibility.

But big questions were at the heart of this year’s festival. The theme was Brave New Worlds, with ten debates forming the backbone of the programme, on weighty topics such as ‘Is democracy at risk?’ ‘What is the lure of the dystopia?’ and ‘Is technology changing our brains?’ It’s a novelist’s job to wrangle with such questions, and Margaret Atwood, of course, is one of the masters. No surprise then that she was in great demand, her event selling out far in advance, as the creator of many brave new worlds, including those in The Handmaid’s Tale, Oryx and Crake and now the post-apocalyptic new work from Margaret Atwood, MaddAddam,

Also sold out was Kazuo Ishiguro, another writer who has explored dystopian possibilities to devastating effect. Presented with the Sunday Times Award for Literary Excellence, he gave a fascinating and entertaining overview of his career, from his early novels about the Japan of his childhood to the Booker-winning The Remains of the Day and the brilliantly disturbing Never Let Me Go (film version starred Keira Knightley) – and even offering a glimpse of his upcoming novel The Buried Giant, set in post-Roman Britain, not released until March 2015.

Another particular highlight of the opening weekend was novelist David Mitchell. The virtuoso author of Cloud Atlas has delivered yet another bold, thrilling piece of writing in The Bone Clocks, one that spans a vast canvas and toys with structure, linking six novellas ‘like a row of terraced houses with internal doors between them’. The joy of seeing Mitchell is in having all this brilliance brought warmly and wittily down to earth. Never pretentious and refreshingly unserious (he took great delight in interrupting his own reading to lament his dodgy accents), he was full of generosity to his audience.

Cheltenham had yet more A-listers up its sleeve. Salman Rushdie was in conversation with Kirsty Wark on Friday, having received the PEN Pinter Prize for 2014, while on the closing Sunday Hilary Mantel talked about her new collection of short stories, The Assassination of Margaret Thatcher, which has already stirred up plenty of controversy.

With over 500 events packed in, the big names were a mere fragment of the complete event. The bonus of these big literary festivals is that everything is thrown into the pot. Fiction writers like Sarah Waters, Rose Tremain, Colm Tóibín and Ian Rankin jostle alongside the Wellcome Book Prize shortlist 2014 authors, actors Damian Lewis and Helen McCrory, historians, political commentators, comedians and celebrity chefs. Cheltenham 2014 has come to an elegant close for this year. Stand by for Cheltenham Literature Festival 2015.